◀Go back to early Britain      Go forward to Edward the Elder ►

Although there is no English Monarchs study on his era, Alfred the Great does play a part in the series. ‘Alfred the Great’ was listed in the earliest books in the series and the Methuen reprints of English Monarchs titles to at least 1990 as “In Preparation” and to be written by Professor Dorothy Whitelock (1901-1982) of the Department of Anglo-Saxon, Norse and Celtic, University of Cambridge, the premier specialist in Anglo-Saxon England. This is curious. Professor Whitelock died in 1982. How her name came to be published in the forthcoming list long after 1982 is not explained, so we must assume this was due to a lack of attention on the part of the publisher. The English Monarchs titles published after Professor Whitelock’s death in 1982 were William II, Edward I and Henry V, with reprints of Henry VI, Edward IV, Richard III, Edward the Confessor, William II and Edward I. Many, if not all, of these books continued to promise the unfinished volume on Alfred.

Whitelock's biography of Alfred was expected "about 1980", according to a note the author included in the select bibliography on page 104 of 'English Historical Documents c500 - 1042' of which she was the editor. The second edition (printing?) of this book bearing this note was published in 1979 and indicates that work on Alfred was well advanced. However, the book remained unfinished in 1980 and was not completed.

It is a pity this book did not take its place in the series and now the opportunity has been lost. As the series grew after the first few titles it became clear that a book on Alfred would have been the exception, given that he was never king of all England, and the loss of this book meant one fewer study of the Saxon kings, a rare enough commodity even now. While the early days of the series saw a little Saxon action, not all of it was committed to print. Only Frank Barlow’s ‘Edward the Confessor’ saw publication; the fates denied us Whitelock’s book on Alfred; and an attempt by Simon Keynes to write a biography of Æthelred II was abandoned. Keynes, like Whitelock, is Professor of Anglo-Saxon, also at the Department of Anglo-Saxon, Norse and Celtic, University of Cambridge. The biography of Æthelred attempted by Keynes ultimately was written by Levi Roach and published by Yale in 2016, although in another quirk for the Saxon kings this book was not attributed to the series. The next Saxon king to have a book issued in the series was Æthelstan, and we had to wait until 2011 for Sarah Foot’s book on this king to be published.

Even if Yale was to publish a biography of Alfred it would not be an English Monarchs title, though it will be noted here as a ‘Companion’ book. Until then, interested readers must be content with a few currently available options listed on this page. Older and out of print titles are to be had for the want of looking. The next king with a book in the series is Æthelstan. Alfred’s son and successor Edward the Elder has no English Monarchs title but three book extant. See the page for Edward the Elder if you wish to explore the years between Alfred and Æthelstan.

A few books on Alfred are recommended in the adjacent column, all titled Alfred the Great. There are many others.

A reader of this website (thanks Justin) has recommended a book called King Alfred the Great by Alfred P. Smyth (OUP, 1995). This is very much an iconoclastic analysis of Asser as much as Alfred and at the time caused much controversy and discussion. Oxford describes the book as "...a chronological examination of the much-disputed medieval biography of King Alfred, attributed to the king's tutor, Asser. The book argues that Asser's life is a medieval forgery..."

For those who enjoy historical fiction, Alfred has come carefully upon his hour in a new television series of Bernard Cornwell’s Warrior Chronicles series of novels (retitled as The Last Kingdom series)  telling Alfred’s story over a dozen volumes. Cornwell is also the author of the splendid Sharpe novels, also filmed for television to great acclaim. Perhaps a similarly successful outing on TV for this new series of films on Alfred will increase the interest for historical reading material in book form. This might be Yale’s opportunity to fill a gap.

This 17th Century portrait of Alfred the Great was commissioned by Thomas Walker, Master of University College Oxford for two periods: 1632–1648 and 1660–1665. The portrait remains in the possession of the College. 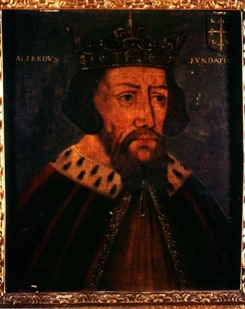 Alfred the Great by Justin Pollard

Alfred the Great by David Horspool

Alfred the Great by Richard Abels