This is the most recent Companion book.

See what might be next to be published by Yale

An earlier iteration of this website stated that Cromwell was outside the range of the English Monarchs series and that if Yale were to publish a biography on Old Noll a page would then be created for the book. Such a time has arrived with the publication of Yale’s ‘The Making of Oliver Cromwell’ by Professor Ronald Hutton. Readers familiar with biographies of Charles II will already know of Professor Hutton’s 1989 book on the Restoration king.

This new book takes its place as the latest in the list of what this website is designating as Companion Books, defined on the Introduction page as: Yale biographies of critical importance to the series books themselves: studies of regents, successors, contestants or those who shared the throne in some capacity. This is such a book.

Hutton’s book was released in the UK on 10 August 2021 and, better still, was described by Yale as the first volume of two, and subsequently by the author as being three volumes. Volume one takes the narrative of Cromwell’s life to the end of the Civil Wars. The paperback is to be released in paperback in November 2022. No date is available for the release of the second volume.

The author has previously written Yale books on magic, druids and paganism and in his Acknowledgements page to his Cromwell book is fulsome in his praise of the Yale team and in particular the book’s editor Heather McCallum. He also mentions that the book, in true English Monarchs style, is designed “both as a monograph which will contribute to academic debate and as an introduction to those new to the subject and with broad interest in history".

Which leaves the question about why the book was written when there are many extant biographies of Cromwell written by eminent historians for the reader to select. Hutton says in his introduciton that in the broad sense this is due to “changing historical perspectives” - true of any era or subject and a particular characteristic of Yale’s English Monarchs Series authors is to challenge conventional wisdom and to push historical research onwards. Despite these recent fine portraits of Cromwell Hutton finds, though, that essentially they are glimpses of the same man and that all these biographers have struggled to capture the elusive character of the subject. He says, “There is, I would suggest, an uneasy feeling among experts in his period that Cromwell is still somehow eluding them, and that nobody has yet quite managed to get to grips with him.” Capturing this personality is the task of Hutton’s new biography and he approaches it by attempting “…a better contextualization of Cromwell in the surrounding events and pressures of his time” which, he says, reveals a more pragmatic and devious personality than found in Cromwell’s own speeches and writings on which many a past biography has relied.

Professor Hutton is interviewed by Professor Suzannah Lipscomb in the podcast linked in the Extra Content box in the adjacent column. At the end of this discussion Professor Hutton reveals that he is engaged in writing not only volume 2 of his Cromwell biography but also volume 3 - which will be the longest of the three volumes. He also expresses his love of the writing process which he observes is not always the case with authors.

This is the fourth Companion Books title availabe as an audiobook. The audio version is narrated by Michael Page and is nearly fourteen hours long. The hardback was published between the English Monarchs books Edward the Confessor by Tom Licence (2020) and Elizabeth I - which is due in 2024.

As an aside, it might be amusing to know that Cromwell's fame stretches almost to the door of Yale University; the town of Cromwell in Connecticut, about an hour's drive north-east of New Haven, was named either directly after Oliver or after a vessel called Cromwell which in turn was named after Oliver Cromwell.

Link to the book at Yale 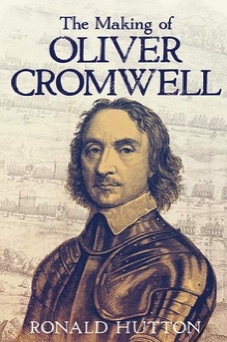 Ronald Hutton has written other books which would augment splendidly a reading of his new Cromwell biography:

Podcasts: Professor Hutton was a guest on Dan Snow’s History Hit podcast on 17 August. The two discuss the book and Cromwell. This can be accessed here or here, among many possibilities.

He was a guest also on the History Extra Podcast on 2 August 2021 and this can be accessed here.

A third discussion with the author was published on 15 November 2021 in the Not Just the Tudors podcast presented by Professor Suzannah Lipscomb. This can be found here or here.

Video Presentation: You can see Ronald Hutton's presentation 'Oliver Cromwell: Saint or Serpent' at the Crabchurch 2020 event in Weymouth on 29 February 2020. View it in the box linked below.

Hardback: Two images are combined: the line engraving of Cromwell cololured in sepia tones is cropped from the portrait signed R. Taylor and is dated by the copyright owner, Getty Images, as 1753.

This is placed over the background image of a map of the order of the Battle of Naseby, held by the Royal Collection Trust and credited on the  dust jacket to J. Sturt c.1702. Portraits of Cromwell in his armour were very common.

The Making of Oliver Cromwell

Professor of History, University of Bristol