George I: Elector and King

Promoted to the English Monarchs series in 2001

The biography of first of the Hanoverian Kings, of the Georgian subset, was not published in the English Monarchs series originally. Professor Hatton’s study of George I was published as ‘George I: Elector and King’ in hardback in 1978 by Thames and Hudson (UK) and Harvard (USA) in 1979, then by Yale in paperback in June 2001. This title was never published by Methuen.

This book was included in the series by Yale only after their acquisition of the printing rights following their acquisition of the English Monarchs series. It was not included in the series at the time of its original 1978 printing. The Yale printing claims to be a new edition, but it is not. It is the same text as the original 1978 Thames & Hudson hardback with the addition of a new introduction by area specialist Jeremy Black (see the book page for George III). This is another example where the edition statement is confused with a new printing.

The Yale paperback reprint from 2001 has the same pagination as the original 1978 hardback. Both have the main text commencing on page 15. The only difference is that the Thames and Hudson/Harvard copy commences page numbering from the half-title page (which might be mathematically sound but unconventional), while the Yale printing makes use of the space before page "15" to insert Jeremy Black's eight page foreword seamlessly into the book.

The first third of this book, about one hundred of its three hundred pages of text, examines the life of George in Hanover. It looks in detail at the court and politics before the point of George relocating to London as the British king. Without some foreknowledge of German, and specifically Hanoverian politics, many readers may find this harder work than later in the book where the focus moves to London.

The last two thirds of the book therefore are of greater familiarity to most readers in the English-speaking world and doubtless where most English language readers will start the book. Professor Hatton provides a thorough analysis of both roles of George’s life, in London and in Hanover. Yet, Professor Hatton is at pains not to divide this biography into these two aspects but, instead, see these two roles as part of the wider stage of European politics in which George I had two interests. In her studies she had access to hitherto untouched German records as well as the Royal Archives in Windsor.

German speakers, however, are more likely to be much familiar with Hanoverian history, and as luck would have it the German publisher Societäts-Verlag released a German language version of this book in 1982 with the title ‘Georg I: Ein deutscher Kurfürst auf Englands Thron’ (George I: A German Elector on the throne of England).

Jeremy Black, author of George III in the series, adds a seven page foreword to the Yale edition of George I and in it “...seeks to offer an updating that focusses on perspectives suggested by subsequent work”. He looks at the research that has been conducted since 1978 and where the text of the book is out of date. He concludes, however, that Hatton captures what eluded other biographers of George I. Black’s comments echo contemporary reviews of the book. Geoffrey Holmes (Lancaster University) reviewed the book in European History Quarterly, Volume 10, no.1 (1980), describing the effect of Hatton’s biography as transforming the image of George. He says that the negative sketches of George, portraying him as boggle-eyed dummkopf “have been brushed aside by one of the vigorous broom of new research” and that Hatton’s biography, "bristling with scholarship”, is the most formidable broom of all.

An important addition to the study of the reign of George I was made by Jeremy Black himself. His 2014 'Politics and Foreign Policy in the Age of George I, 1714-1727' (Routledge, ISBN 9781409431398) explores the impact of foreign policy on domestic politics which extends the scope offered by Hatton's book. The publicity for Black's book says Hatton's biography of George I "...while impressive, devoted relatively little attention to the domestic political dimension of foreign policy. In contrast, Black links diplomacy to domestic politics to show that foreign policy was a key aspect of government as well as the leading battleground both for domestic politics and for ministerial rivalries." In his preface (on pages vii and viii) Black comments that Hatton's book "...devoted relatively little attention to the domestic political dimension of foreign policy, preferring, instead, to focus on diplomacy...Moreover, Hatton largely lost interest after the death in 1721 of James, Earl Stanhope, the key Secretary of State and the statesman who appealed most to her. The important last years of George's reign were treated in less detail." 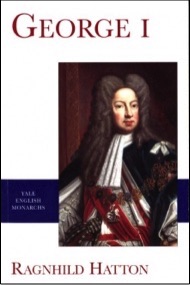 Cover: The original T&H/Harvard cover, reused for the German translation, has a portrait of George by Godfrey Kneller, the ownership of which is credited to the Kielmansegg family, distant relations of the king.

The Yale printings have a 1714 portrait by Sir Godfrey Kneller and owned by the National Portrait Gallery.

For those whose focus is on this period, Jeremy Black's study of this area is an essential adjunct to and embellishment of Ragnhild Hatton's biography, especially as there are few biographical histories of this reign. The best advice is to find a library copy or purchase a used copy - a new copy of Black's book is priced at about £100 or US$140 which is an absurd price to pay for a three-hundred page book, and even the ebook version is highly expensive. Look for a used copy.

In European Studies Review [now called European Studies Quarterly], Volume 10 Number 1 (1980) Geoffrey Holmes (University of Lancaster) wrote that Hatton's biography has relegated all previous - and biased - biographies of George I to the dustbin of history. He describes the author as "bristling with scholarship" giving George credit for "a leading part in shaping foreign policy throughout these years when European statesmen grappled with the problem of how to preserve the precarious balance of power in western and southern Europe..." Importantly for Britain, "Professor Hatton argues very strongly and with conviction that the king not only learned, after five years or so, how to wear his British hat and British spectacles when looking at any continental problem, but that after 1719-20 he was no longer capable of adopting a purely Hanoverian perspective". If there is a shortcoming with the book, he continues, it is Hatton's handling of purely British domestic politics; errors which, he suggests, can be corrected in a second edition. Alas, that edition never came. The Yale version is the same text as the original 1978 printing. However, the 2014 book cited above by Jeremy Black goes a long way to correcting any slips in Hatton's text. Specialists of this era would do well to include that book in their collection alongside this English Monarchs title by Hatton.

The focus on foreign policy of George does rather mark this book as insufficient in the modern day. Hatton's text almost completely ignores the rule of George I in Britain in the mission to rescue the king from his hitherto poor image as a European statesman. In this she succeeds admirably, and sumarises George's efforts in foreign releations and treaties with all the European powers - a position he was in a unique position to influence. The book demands an intimate knowledge of early eighteenth-century European politics, the kings and politicians and their relationships and as such does not bear the flavour of the English Monarchs series books which generally are careful to build the complete picture of a monarch for two audiences: those familiar with the topic, and readers embarking on discovering the period for the first time. One very irritating practice of some academic writers is employed by Hatton: the liberal quotations in foreign languages (mostly French) with no translation for the English reader. Some pages of the text are full of quotes from important sources and are, for the monolingual, incomprehensible. This is compounded by the author then discussing the importance of the French or German document at some length. Given too the age of Hatton's 'George I', and that it was published during the Eyre/Methuen years of the English Monarchs series, it is a prime candidate for a replacement history of this reign as part of Yale's recent task of refreshing the oldest titles in the series.

Collectors of the hardback copies of English Monarchs books are warned that the Thames & Hudson (British) copies of 'George I' are usually found with a high degree of foxing and that purchasers would be better served by seeking the American-published copy from Harvard.