◀ Go back one royal mother    Go forward one queen and duchess ►

‘Henry II’ was listed as forthcoming on the jacket of the first book in the series, ‘William the Conqueror’ in 1964 and published in hardback in 1973 by Methuen and University of California, with a paperback edition by both in 1977. A new paperback version was available from Yale in 2000 which included a new introduction by Judith Green, Emeritus Professor of Medieval History at the University of Edinburgh (and biographer of both Henry I and King Stephen), discussing the book and the state of scholarship since the original publication of the book in 1973.

W.L. Warren’s ‘Henry II’ was for nearly fifty years the most substantial book in the series for a long action-packed reign, but the 2020 'Henry III' by David Carpenter has exceeded this by close to one hundred pages. Warren's book is 630 pages of text, dwarfing his other entry in the series on Henry’s son, the ill-regarded King John (the king, not the book). The book commences as a chronological approach to Henry's life and reign but is segmented by a middle section of analysis examining the governance of England and the Angevin "Empire", and also of relations with the church. A chronological approach resumes for the last third of the book.

One aspect of this biography which modern readers will find unsatisfactory is Warren's wilfull dismissal of Eleanor as an irrelevance in Henry’s reign. Ralph V. Turner, Eleanor’s Yale biographer, has shown demonstrably her significance in both French and English history. The early-1970s view of her, as reiterated by Professor Warren, is now antique and unacceptable. Eleanor has only rare mentions in this book, chiefly in Chapter 3 and then only for a small number of pages. Modern historians have a more nuanced approach to women in medieval courts, especially queen consorts, and Eleanor is shown in these works to be both active and assertive in her role. Turner, for example, in Chapter 5 when he examines her role as mother and regent says of Eleanor that she “…created a genuine partnership with Henry II, possessing a post of responsibility as his regent. At the same time that she was deeply involved in royal governance, she was also fulfilling successfully a queen’s basic task, bearing children, especially sons, to continue the royal line." He tackles Warren’s comments directly on page 152. Henry’s long absences from his kingdom does not draw from Warren the opprobrium so often meted out to his son and successor Richard for his similar lengthy sojourns on the continent and elsewhere, yet he gives Eleanor no credit for her positive role in the good governance of England during these periods of Henry’s absence. This aspect of Warren's book marks it as a title needing an update, as has been achieved for the series with David Bates' 'William the Conqueror'. Unfortunately, Henry II is an English king with one of the smallest number of biographers and, as yet, none of the depth of Warren. A new academic biographer of Henry has not yet emerged. Ralph V. Turner might be a contender; he has already written biographies of Henry's sons and successors Richard I and King John plus Henry's consort, queen and regent Eleanor of Aquitaine.

This is the sixth book in the series, published nearly a decade after the first book. By 1973 professional academic historians had widely adopted the new style of segmented analysis of an era, or reign in the case of the English Monarchs books. The previous book, Henry VII published a year before Warren's Henry II, was the first to adopt this style fully, although Scarisbrick's Henry VIII was the first to use this technique which was to dominate the English Monarchs books until well into the 1990s. Warren, however, is perhaps the most enthusiastic employer of segmented analysis. Working against this technique however is a response from some readers that it delivers a less satisfying reading experience, and makes the subject more distant than would be experienced in a biography observing a more chronological approach. This applies to other professional historians and not a general readership alone.

Reviewing the book in The English Historical Review, Vol. 90, No. 355 (April 1975), John Le Patourel (University of Leeds) wrote "It is apparently intended to be, as it is in fact, an exposition of established ideas rather than the presentation of new evidence or a new interpretation.” "The author attempts to overcome this difficulty by writing a political narrative of the reign in more or less conventional form, and by picking out two main topics - the government of England and Henry's relations with the Church - for extended analytical treatment” which he finds generally satisfactory. At times he found the narrative went off in lengthy asides which would be better left omitted. He also thought the book was much too long and would have been better with “the discipline of brevity”. Le Patourel finds too much Anglo-centric writing and not enough of Henry’s Angevin forebears, though he does add that this is the shape of the material Warren was using. Despite this, the book is praised because "it does seriously consider the extent to which Henry's dominions constituted a single political entity and what sort of a political entity that could have been.” He says the book will do a great deal to stimulate interest in the politics of the twelfth century, though "protest must continue to be made against any account of King Henry II which leaves the impression that he was an 'English' monarch.” John Le Patourel held the original commission to write the English Monarchs book on Edward III, but he died in 1981 with work unfinished.

Michael Altschul (Case Western Reserve University, Ohio) wrote in Speculum Vol. 51, No. 1 (Jan., 1976) that "A major work on King Henry II has been long needed, and this Dr. Warren has provided in almost every respect. This is a massive, well-written, informative book, altogether worthy of the distinguished quality (and qualities) scholars

expect of volumes in the English Monarchs series." He finds the book a "...careful and judicious analysis of Henry's reign...His account can be read with profit by beginners no less than by specialists."

Entries in the series such as this major work and the David Douglas ‘William the Conqueror’ were influential in establishing the series as a home for high quality histories. It is a tribute to the authors that they are still read today.

If you do wish to acquire this book you might be in for a struggle. it seems that this is the one English Monarchs title which has gone out of print (apart from James I which was retired from the series in 1997). It does not appear on either the UK or the US Yale list of series titles, it does not appear in a list of search results at these two Yale websites, and stocks are limited in all of internet book vendors. We cannot presume from this that Yale is considering replacing the book with a new Henry II title. The 1977 printing is available from the University of California Press website for about US$42, at least for now (and for North American customers only).

This history of Henry II won the Wolfson Literary Prize for History in 1973, the second year of the award. Professor Warren is the only English Monarchs author to have won Britain’s premier award for history.

Buy the book from the University of California Press 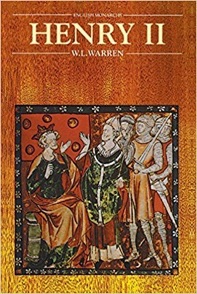 Cover: A scene showing Henry arguing with Becket. Credited in the book as being from the preface to a copy of Glanvill’s Tractatus de Legibus et Consuetudinibus Angliae in Cottonian manuscript Claudius Dii. British Museum.