Henry VII was published in hardback by Eyre Methuen and California in 1972, and paperback by Methuen in 1977. It had to wait twenty years before another publication in paperback - by Yale in 1999. This new printing has a new introduction by George Bernard (University of Southhampton) and some bibliographic embellishments but no change to the text.

In his introduction to the 1999 Yale printing, Professor George Bernard (University of Southampton) notes that Chrimes went against the tide of views on Henry VII in portraying him not as a new broom but as an old brush. The conventional view of Henry was that he transformed government and institutions. Chrimes, says Bernard, rejected this view, maintaining that Henry was a conventional late-medieval ruler whose steady purposefulness created the Tudor era.

Chrimes himself, in his preface, states that the mission of this book is not as a biography as such but rather serve as “...a study of the impact of Henry Tudor upon the government of England” and “ a report - an interim report - on the existing state of knowledge on these matters”. That this book is still relevant forty years after its original publication in the English Monarchs series, and still printed by the series publisher, is a testament to the quality of Chrimes’ work. There have been other studies of Henry VII since this was published in 1972, and most in recent years, but few have gathered as many positive comments as this book, nor, as George Bernard concludes, attempted a synthesis of the large range of aspects of Henry’s life and reign.

Chrimes notes in the Preface that until well into the twentieth-century the template for a biography was the account published in 1622 by Francis Bacon. Bacon's 'History of the Reign of King Henry VII' profoundly influenced historians until modern times. Chrimes wryly comments on Bacon's merits: "Bacon's powerful intellect and seductive prose style commended his work to generations of his readers. But it was far from being...a primary source. Its splendidly-turned phrases and striking appraisals were no substitute for research." Therein lies a comment worthy of many a popular history today!

The book is set out in three sections: The establishment of the dynasty; The personnel and machinery of government; and Statecraft. The first secion, largely chronological, describes the efforts of Henry to settle-in the Tudor power-base from next to nothing after Bosworth and the rebellions he faced to his rule; the second describes how Henry's government managed finance, the legal system, official policy and with parliament; the third section examines the administration of Henry's fiscal and social polices, relations with the church, foreign policy, and law enforcement. A twenty-two page epilogue is added which attempts to present a portrait of Henry Tudor from the scant evidence that survives. In structuring the book this way a narrative of Henry's life is eschewed. In a wry comment in his review on H-Albion of Sean Cunningham's Henry VII (as below) David Grummitt (History of Parliament Trust) says that Chrimes' work is "...a book in which the king himself was strangely absent".

Chrimes is the first to note that the sources are thiner for this king than others, even kings from the early middle-ages. There seem to be fewer "biographies" of Henry VII than most English monarchs and similarly few studies examining his court and government. For those trying to get closer to Henry one study stands out as worthy of attention: 'Henry VII's New Men and the Making of Tudor England' (Oxford University Press, 2016) by Steven Gunn (Professor of Early Modern History, University of Oxford). This book is described in publicity as "a tour-de-force of the historian's art of persistent archival digging and also the science of processing that historical evidence into a compelling study". With Chrimes' study for the English Monarchs series, this book will be invaluable in studying the reign of this neglected king.

Cover: The Methuen books show an image of a bust of Henry sculptered by Pietro Torrigiano between 1509 and 1511. It is owned by the Victoria and Albert Museum.

The Yale books show a higher quality photograph of the same bust. 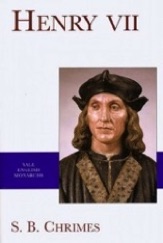 Reviewing Chrimes' book in Welsh History Review, January 1, 1974 (7), Charles Ross observed that Chrimes has “…been able to distill the fruits of their [earlier scholars] researches into the most up-to-date, lucid and valuable survey of early Tudor kingship which we possess.” He adds that new perspectives are not lacking either, although the analysis of legislation is rather tedious and would have been more use looking at its practical effects. Chrimes is successful in bringing into focus the personal character of Henry’s rule. Ross felt that greater inspection was needed of Henry’s relations with the nobility “for it is here that policies stand out most sharply in contrast with those of the Yorkist kings.”

Geoffrey R. Elton (Clare College, Universtiy of Cambridge) thought in The Historical Journal Volume 16, Number 3 (1973) thought that "The book is beyond question the best and fullest account of the reign written so far." He finds one aspect of the history lacking: "Altogether I find the account of parliament and legislation the least satisfactory part of the book. Professor Chrimes admits the doubts that hang over any identification of policy as reflected in statute, but he attempts no systematic classification of Acts...and steadily moves towards a position of judging the king's policy from the material on which he has justly cast a doubt". He concludes, "...faced with the impossible task of writing a life of this king, Professor Chrimes has done a sober, sensible, well-structured and magisterial job of telling the story of his reign."

A more recent appraisal of the book notes that Chrimes' view of Henry VII was not as inventive as some contemporaries would suggest. In her review of 'Henry VII’s New Men and the Making of Tudor England’ (2016) by Professor Steven Gunn, Professor Christine Carpenter (University of Cambridge) identifies Chrimes’ analysis of Henry as part of the traditional view of Henry’s relationship with the nobility; she notes that it is consistent with an old interpretation of Henry and his government. "Back then, the old interpretation was barely challenged. This was still the king who spurned and broke the nobility, those alleged suborners of the late medieval crown and cause of the Wars of the Roses; who immeasurably strengthened the monarchy, taking it into a ‘post-feudal’ modern world…” and continues, "Even if the volume on Henry VII by Chrimes in the defining Eyre/Methuen (now Yale) English Monarchs series, published in 1972, was by a medievalist and was more critical of Henry than the norm, especially of the last years, it was in keeping with the standard version in essentially having no politics after the early rebellions – a reflection of how the reign had been studied – and, despite the muted criticism, still saluting Henry as the indispensable foundation-layer for the greatness of Tudor England." Professor  Carpenter's comments put Chrimes' book in a wider perspective and indeed suggest that this book is a good candidate for a replacement in the English Monarchs books, a trend which is developing in this period Yale's modernisation of the series.

Given the identification of some shortcomings of this book that the abundance of detail on the analysis of legislation and policy makes for heavy going, modern readers may find a more traditional narrative approach of the reign of Henry VII to be preferable. This is attempted in several recent books: 'Henry VII' by David Grummitt (Routledge, 2006); 'Winter King' by Thomas Penn (Penguin, 2010); and 'Henry VII: The Maligned Tudor King' by Terry Breverton (Amberley, 2016). All these are attempts at a chronological overview of Henry's reign.

A copy of the 1972 first edition hardback of Professor Chrimes' book is usually very expensive to obtain from used book vendors, possibly the most expensive out of print title in this series to obtain. Clearly the Yale paperback has a lot to recommend it.