◀ Go back to Harold   Go to the next study of William ►

The earliest published title which was issued as part of the series was William the Conqueror. The first edition was printed with the retail price inside the dust jacket: 63 shillings (or £3/3). Professor Douglas is given credit on the dust jacket for the first edition of this book as Consulting Editor for the English Monarchs Series. This role was passed to Professor J.J. Scarisbrick in 1981.

This book was issued in 1964 Eyre & Spottiswoode in hardback and paperback (in the UK) with reprints in its first year as well as 1966, 1969 and 1977; and University of California Press in hardback (in the USA). California reprinted it in 1967 as a hardback and paperback. Methuen republished the book as a paperback in 1969 and in 1977. The 1969 paperback was issued as part of Methuen’s ‘University Paperback’ series (number UP 301). There was no mention in this printing of the title being part of the English Monarchs series and the only attribution is in fact to the University Paperbacks series.* A prestige version of William the Conqueror was published by Easton Press (USA) in 1996. Yale reprinted ‘William the Conqueror’ as a paperback in 1999.

On the occasion of the release of the 1969 paperback the book was reviewed by D. J. A. Matthew (University of Durham) in The English Historical Review, Vol. 86, No. 340 (July, 1971). Matthew made the good point that “It amplifies and consolidates that work [on Anglo-Norman history], without really breaking new ground, but this treatment in extension has enabled the author to reach a public that never opens a learned periodical...It has not been written for narrowly academic benefit and his major achievement has been to describe the 'Norman impact upon England' magisterially and without condescension, in a style that is immediately intelligible". Here Matthew has hit the nail on the head regarding the purpose of the English Monarchs series. It’s not a bonus that the book is readable for a wide audience, it is the whole point - that high quality research and writing should be available for a wide audience.

The main achievement in this book, Matthew continues, “...is an exhaustive description of how the Normans' family and local connections created in Normandy an aristocratic society which from control of their homeland achieved a similar dominance in England.” Despite some quibbles about style and some contradictions in argument, Matthew concludes,  “Majestically sweeping even the small men into their place in the great story of the most successful adventure known to English history, Douglas feels the excitement of it as no other modern writer does. In him the romantic tradition has flourished on scholarship.”

Although King John has been given the honour of the oldest book in this series because it is the first published title (see the commentary in the King John page) the statement on the rear cover of the first printing of William the Conqueror is unequivocal that this is the first book issued in the series and that other titles are in production.

*The ISBN scheme commenced in 1967. Numbers appended to pre-1967 books occurred when the book was reissued from 1967.

Of note are three books mentioned on the rear cover as forthcoming but which changed before publication:

• ‘Edward VI’ by Dr. Peter Ramsey (provenance unknown). This title was published in 1999 and written by Jennifer Loach.

• ‘Alfred the Great’ by Professor Dorothy Whitelock, Department of Anglo-Saxon, Norse and Celtic, University of Cambridge, (1901-1982). This title was never published.

Professor Douglas delivered this book in the Ford Lectures in British History at the University of Oxford in the 1962-63 academic year prior to its publication in 1964. He is one of only four English Monarchs authors to have done so. The others were J.J. Scarisbrick in 1981-82 and David Mathew in the 1945-46 academic year - whose book on James I has been deleted from the canon! Additionally, David Bates joins this list of Ford lecturers with the publication in 2016 of his Yale English Monarchs biography of William the Conqueror. His presentation for the 2009-10 lecture was on the Normans.

In October 2016 Yale published a new biography of William for the Yale English Monarchs series: ‘William the Conqueror’ by Professor David Bates. (See the notes on this new book in the next page). Consequently, the biography by Professor Douglas has been retired from the series and has been replaced by the book by Professor Bates. This means that the first two English Monarchs titles published, this book and James I, have now been retired from the series. The new James VI and I title has no publication date and may be some years away. 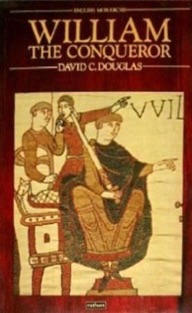 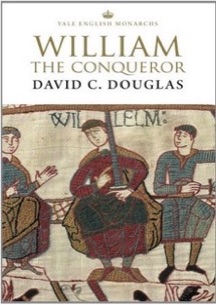 Cover: The early covers of the Douglas book (above) snip the image of William on his throne; removed is the remainder of this frame where Harold is making his solemn oath on holy relics. The Yale paperback and Kindle have a different image; this second scene shows William at his base at Hastings banqueting with Bishop Odo and his barons.

The Norman Impact Upon England

and Emeritus Professor of History,