Readers wishing to collect the English Monarchs oeuvre have an exciting hunt ahead. Those of us who have started collecting the books when Methuen was the publisher have a polyglot collection, comprised of different styles of covers, different publishers, a mixture of hardback (“cloth” in the book trade) and paperbacks, and perhaps some of the four titles released in their earliest iteration by other publishers before they became English Monarchs series titles.

Decisions will need to be made about just what it is you wish to collect: hardback or paperback; new Yale printings or original Methuen printings; specific era of interest or the whole collection? Be aware that any Methuen book printed during the 1980s will be produced on very poor quality paper. A coarse, fluffy paper was used with a high acid content. This gives the paper a burned or yellow tinge with age. Four new titles were produced in this period: Henry VI (1981) , Richard III (1981), William II (1983) and Edward I (1988). Henry V (1992) may have escaped this dreadful paper - the pages of the University of California copy are in reasonable condition - but there also were a number of reprints during this decade and these also were affected. See the printing list for details. Rapidly increasing inflation in Britain in the late 1970s, and the consequent leap in prices of the materials necessary to produce a book, required economies in book production. The use of this low-cost and low-quality paper was an attempt to contain prices. This paper was acceptable when the books produced were new, but the acid in this cheap paper quickly became evident, making the whole book yellow within a few years. Therefore, if collectors are considering purchasing titles printed in this era do not be disappointed when the book arrives from the vendor in a less than attractive state. From Richard II (1997), when Yale took command of the series, the state of paper was again of a high quality. Copies of this Yale title are in excellent condition, whereas a 1990-printed copy of Henry VIII is now very yellow. Compare this to the 1964 William the Conqueror, published by Eyre Methuen. The pages are still crisp, white and inviting. Knowing the variety of books in the series it’s a pleasure to obtain a new Yale title. “High quality books at the lowest possible price”, as Yale editor Robert Baldock has said.

Yale still has in print close to thirty of the titles as paperbacks. See here for the current selection. (Note that the last three years are mostly hardbacks). It would seem appropriate for beginners, then, to commence your collection with the most available titles and work from there. These paperback versions, while more flimsy than the hardbacks, are more affordable. They also have a longer shelf-life as book stock. Hardbacks are on sale for for a short time before they start to disappear. The cost is too great for the general public as they are produced for a small audience. Publishers recognise this by following up the initial publication of the hardback with a paperback after about a year. The hardback then is allowed to drift out out print and usually never reprinted. The print-run of hardbacks sells mostly to collectors (such as your website compiler), academics, libraries and specialist bookshops. Thereafter they have a life as used books in stores around the world and can be found at retail aggregators such as ABE or Bookfinder. It is here that you can pick up affordable copies of originally highly-priced books; if the original hardback was in short supply, or it becomes popular long after its time, then you can expect to pay more than the original price. One example of a classic work being worth its weight in gold is the first volume Jonathan Sumption’s series on the Hundred Years War. This book was printed only once in hardback in 1990. Used copies of this first volume in hardback can change hands about two hundred US dollars. Similarly, a copy of the 1981 hardback version of Henry VI requires deep pockets to acquire. It seems to have had only one hardback printing and only by Methuen in Britain and therefore is a rare book with a high asking price.

Older titles in the series have never been issued by Yale in hardback. The second edition of Queen Anne has never enjoyed a hardback version. The first edition of 1980 was printed as a hardback by Routledge in 1980, and the second (revised) edition as a paperback by Yale in 2001. Getting a hardback copy of this book is not an option. Similarly, George I has only had the one edition but the hardback was printed in 1979, simultaneously by Thames and Hudson in the UK and Harvard in North America. The Yale version followed as a paperback in 2001. Collectors will have to choose which of the two to obtain. The Harvard publication is another of those books printed with poor quality paper, all of them now yellow and foxed. Nevertheless, it looks better a shelf with the Yale Georges II, III, and IV than does the paperback version.

Some English Monarch titles will be available as a used book from different publishers. This is more true of the Methuen period, when the University of California Press was the publisher in North America for some titles - and continues to be so for three, even in the Yale period. Have a look at the King John page for the multiplicity of options, though the 1978 Methuen/UC hardback is the best choice (and on nice paper too!). Note also that all the range of what is being called here the ‘Companion’ books were all originally published as hardbacks. These titles are relatively new and some are yet to appear in paperback. Long may they continue.

If you are starting out with the series you will also need to decide if you are going to collect the now deleted title James I (1967) and those which have been superceded by new titles with new authors. The biography of the Conqueror has been replaced and a new biography of James I is yet to come. It is reasonable to expect further titles to be replaced by new books as time goes on. After James I the next oldest book in the series is Henry VIII and, as the author says in the new introduction to the Yale printing, he would have revised some of the text were he writing it now. The discussion of theology broke new ground in 1968, but now might command fewer pages and less focus. A new Edward the Confessor was published in August 2020 but did not replace the 1970 Barlow biography; the two are concurrent members of the series. Similarly, a new Richard III was released by Yale in 2019, although  not as part of the series. Might it be a better choice than the nearly fifty-year old 1974 Charles Ross book? You will need to decide.

Read the pages for each book to determine the best collection policy. With the above in mind there is a lot of virtue in obtaining a library of uniform paperbacks. After all, how often will they be read? If, however, you are impatient to read a new title the only choice is the hardback release rather than wait at least a year. It may be possible to read such a title from a library and then wait to buy the paperback later. See the notes on the Libraries page for guidance. Look also at the Printings page to see the various iterations of each book in the series. 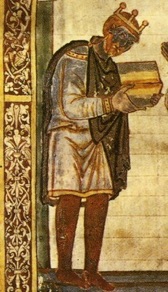 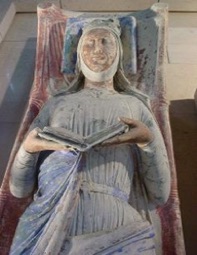 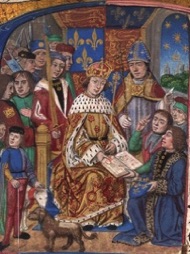 Henry VII is shown to be an English Monarchs reader in this illustration held by the British Library.