Edward, Prince of Wales, son of Edward III, has had more biographies in recent years than his more famous father. He narrowly misses out on being in contention for the English Monarchs series because he predeceased Edward III by a year. The succession passed to his son Richard II on the death of Edward III. Would English history have been different if Edward had lived to be king and Richard ascend the throne as an adult? It’s one of the great questions of medieval history.

Unlike Young Henry, heir to Henry II who also predeceased his father, neither Yale nor Methuen have published a study of the Black Prince. For readers of the series wishing to discover Edward son of Edward, and the man who would have been Edward IV, there are three books from the last fifteen years - and several others since the 1970s - to seek out, including a very new release.

‘The Black Prince’  (Head of Zeus, 2017, ISBN 9781784972936) by Michael Jones (1940-  ), Emeritus Professor of Medieval French History, University of Nottingham, has to be the title most recommended of the books listed here. This new and well-received biography is clearly the most up to date with the latest opinions of Edward, especially the Limoges letter. Nigel Saul, the writer of the Yale English Monarchs biography of Richard II, reviewed this book in History, Volume 103 (355) April 2018. "Jones has given us a superb new study of the Black Prince, which goes a long way to putting flesh on the bones of a figure for too long regarded as a stereotypical chivalric hero."

‘The Black Prince’ by David Green, Senior Lecturer in British Studies and History, University of Nottingham (The History Press, 2008, ISBN 9780752446851) is praised by two English Monarchs series writhers, Chris Given-Wilson and Michael Prestwich and also by Michael Jones who as noted above wrote the most recent biography of Edward.

While we’re on the topic of sons of Edward III, the only quality biography of The Black Prince’s younger brother, time honoured Lancaster, John of Gaunt, is 'John of Gaunt: The Exercise of Princely Power in Fourteenth-Century Europe' (Longman, 1992, ISBN 9781138140295) by Anthony Goodman (1936-2016). This is an exceptional biography and gives a view of Edward III from the perspective of Gaunt, but also examines why Gaunt's reputation over six hundred years is poor. In the best traditions of great historians revising long-held views Professor Goodman examines Gaunt's life and finds that Gaunt's bad reputation is not deserved.

Goodman was Professor Emeritus of Medieval History at the University of Edinburgh. Just before his death he also completed another biography 'Joan, The Fair Maid of Kent' (Boydell & Brewer, 2017, ISBN 9781783271764) examining the life of the Black Prince's wife. The book was published posthumously.

This portrait of Edward by Benjamin Burnell (1769-1828) dates from about 1820. The Historical Portraits Image Library describes it as depicting Edward in an heroic style while remaining historically accurate. His coat of arms, crest and helmet are taken from the relics at his tomb in Canterbury. The portrait is privately held.

Edward of Woodstock, The Black Prince

Buy the Anthony Goodman book on John of Gaunt from Amazon 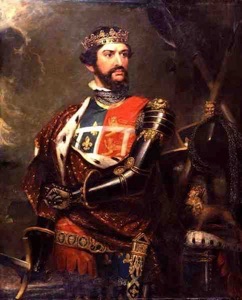