Eleanor is an elusive subject for biography. She is a famous identity in history but at the same time an image shaped by whatever lens through which one chooses to view her. A feminist icon? A Queen of Romance? An Amazonian? A lioness? A “Jezebel” figure, as the early monks portrayed her?

By any measure she is an important figure in two kingdoms. In France she bore her first husband King Louis VII two daughters and in England as the wife of Henry II was the mother of three daughters and five sons, two of them kings. In King Richard’s absence she served England as his regent. Even in her lifetime she was the target of both praise and condemnation. Eight hundred years later her life is still discussed and analysed.

With this in mind, Professor Turner comes to the subject to create the first solid academic study of Eleanor by going back to the primary documents. In analysing her, he knocks down the many fabrications of the past, and exposes the un-researched repetitions of earlier critics, carelessly inserted into modern accounts as fact. Turner references such occurrences in Alison Weir’s 1999 biography, for example. As is so typical of Yale biographies in this series, Turner has the advantage of new sources not available to earlier scholars and has produced a biography worthy of accompanying the English Monarchs series without being a member of it.

Yale published this book in 2009 and this survey recognises it as the first of the English Monarchs “Companion Titles” - a book not in the series itself, but just outside the canon and distinguishable only because its subject was not an anointed monarch of England. The full title of this book is ‘Eleanor of Aquitaine: Queen of France, Queen of England’. The author thanks Heather McCallum for assisting at Yale and therefore she has been credited here as the book editor.

Lindsay Diggelmann (University of Auckland) reviewed the book in The English Historical Review, Volume 127, No. 525 (April 2012) found that Turner was rather too forceful in his criticisms of earlier biographers of Eleanor (at least in English) and that some targets of his ire are not as deserving of condemnation as others. She finds Turner tries to position himself as the saviour of Eleanor’s modern reputation. The lack of documentation on her early life reduces the biography to description of the cultural and political background of Occitania and France, interspersed with numerous speculative comments about Eleanor’s state of mind. Diggelmann thought a shorter treatment might have been suggested here. But overall she finds Turner’s treatment “for the most part balanced, careful and comprehensive."

Linda E. Mitchell (University of Missouri) reviewed the book in The Historian, Volume 73, No. 4 (Winter 2011) reporting that despite the positive aspects of this book "it nevertheless still falls short in painting a multidimensional portrait of this extraordinarily complex woman.” She comments that comparatively little time is spent on Eleanor’s widowhood or the reigns of her sons - the period she had real power. Turner has rejected all previous depictions of Eleanor “as a combination of sensationalizing and psychobabble." She finds the book a little lacking is a portrait of the genuine woman and the passion of Eleanor’s life is somewhat lacking.

Bonnie Wheeler (Southern Methodist University, Dallas) writing in in Speculum, Volume 88, No. 2 (April 2013) highlighted Turner’s achievement in incorporating new material in this biography which “lifts Turner’s Plantagenet chapters to real distinction” and concludes that “Turner’s book will doubtless remain the most historically reliable book in the field.” She adds, “Turner’s work is a splendid example of his deep erudition and judicious reading." Wheeler, though, finds a contradiction in Turner’s aim of rejecting templates to portray Eleanor in favour of reliance on surviving documents, yet is part of the biography he 'relies on “the “may“, “perhaps“, and “doubtless“ school of causality’ requiring judgement over methodology." 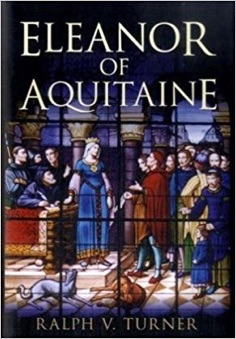 Since this book was published a new study of the historiography around Eleanor has been released by Bloomsbury. ‘Inventing Eleanor: the Medieval and Post-Medieval Image of Eleanor of Aquitaine’ by Michael R. Evans (lecturer at Central Michigan University) examines the myths and iconography preventing us from knowing the real person.  It was published in 2014. This review by Elena Woodacre (Winchester University) is a lengthy explanation of the book which puts Ralph V. Turner’s book into perspective. It is shown to stand well above prior efforts at biographies of Eleanor.

Many other biographies of Eleanor exist, although most are now out of date, but two in particular remain popular, those by Amy Kelly and Marion Meade. Evans describes Amy Kelly’s 1950 biography as influenced by the “courtly love” aspect of Eleanor’s life, while she describes Marion Meade’s 1977 book as treating her as a ‘proto-feminist’. Both approaches, Woodacre says in summarising Evans’ book, continue to promote “...myth and legend over a realistic portrayal of the queen-duchess.”

Professor Turner’s book has been translated into French by Perrine Chambon and Sylvie Lucas. This French language version was published in 2011 by Paris-based publisher Fayard, part of the Hachette group of publishers. The book was later translated into German by Karl Heinz Siber and published by Munich-based publisher C.H. Beck in 2013 in paperback and 2016 in hardback titled 'Eleonore von Aquitanien: Königin des Mittelalters' (Eleanor of Aquitaine: Queen of the Middle Ages).

For those wondering how the publication of this title meshes with the main series - Eleanor of Aquitaine (2009) was published after George III (2006) and before Edward II (2010).

Cover: The cover of the Yale book has an image from 19th Century window from Hotel de ville, Poitiers of Eleanor signing a charter - sans Louis.

The French edition from Fayard has an image from Basilique Cathedrale de Saint-Denis  featuring the French King Louis VII (not overly tactful for a biography of Eleanor).

The cover of the German edition is from the miniatures of the Manesse song manuscript held by the Universitätsbibliothek Heidelberg.

Get a glimpse of Eleanor's town, Poitiers, in this tourist video uploaded to YouTube.

Queen of France, Queen of England