George IV by E.A. Smith was published by Yale in April 1999 in hardcover the year after the death of the author, and paperback in 2001. This title was originally to be written by Professor Michael Port, (now Emeritus Professor of Modern History) Queen Mary, University of London, according to the series list on the rear cover of Michael Prestwich’s 1988 biography of Edward I, and as late as the Methuen 1991 reprints of Edward IV by Charles Ross. Michael Port is an historian prominent enough to warrant an appreciation article in The London Journal : A Review of Metropolitan Society Past and Present Volume 28, Issue 1 (2003). This article was an assessment of his (then) forty-year career. Port’s speciality was writing history with an eye for architecture, certainly a feature of the Georgian period for which he was asked to write for English Monarchs.

Yale had not long acquired the series when George IV was published. This release indicated a new direction for the series. It was the first English Monarchs title to examine a British monarch and it proved to be the first of several. Like all the best books in this series E.A. (Ernest Anthony) Smith challenges past assumptions and conclusions about the subject - in this instance that George IV was a weak personality and a feeble king. Smith gives us a portrait of a different person in his maturity and that he had a good side too. At the time of his death the author was preparing a biography of the next king, William IV, though not necessarily for Yale. It is a loss to scholarship that he never lived to finish it. William IV is another sorely neglected figure (discussed in the next page) who would have been wonderfully represented by an E.A. Smith study. William therefore remains without a scholarly biography of recent decades.

Abraham D. Kriegel (University of Memphis) makes several comments in The American Historical Review, Volume 106, Issue 1, (February 2001): “Smith suggests that while George was not instrumental in producing or guiding the  process of rule by Cabinet and Parliament, he helped to make the birth possible” and that “Smith makes a good case for George IV's achievements as a patron of the arts, his extravagance having become identified with his time. While he does not emerge from E. A. Smith's study as an attractive character, George IV is endowed by his biographer with a tad of human sympathy—an achievement of sorts.” 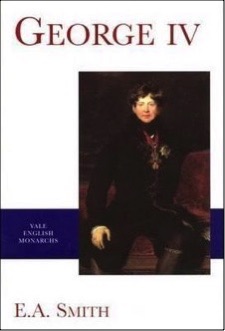 Cover: The portrait of George IV dates from 1822 and was painted by Sir Thomas Lawrence (1769 - 1830). It resides in the Wallace Collection, London. 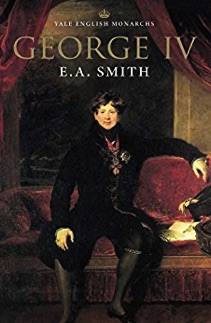 Ian Gilmour, in his piece 'Fuss, Fatigue and Rage’ in The London Review of Books, Vol. 21 No. 14 (July 1999) comments, "Smith was a notable scholar with some excellent books on this period to his credit, and this one is every bit as good as his others. Yet the rehabilitation of George IV is an uphill struggle, and to my mind Smith gets at the most halfway up the hill, sometimes indeed sliding further down it. That, though, is in a sense intentional. After making a claim on behalf of George, the author’s scholarly integrity occasionally leads him to undermine it by providing detailed evidence to the contrary.”

William Christian (University of Guelph, Ontario) in Perspectives on Political Science, Volume 29 Number 2 (2000) states that "...it is hard to agree with the author's conclusion that George's political achievements were substantial. His personal life brought the crown into disrepute and when he finally succeeded to the throne he was an old curmudgeon whose political acts reflected some of the worst prejudices of his father..."

Readers of the series in the early days will recall that there was a suggestion that the series was examining only the early kings. As each new book was published, looking at a Plantagenet, Angevin, Lancastrian or York king (Henry VIII was the only Tudor entry) readers were comfortable in knowing what they were getting. It was only with Yale’s acquisition of the series, when most of these early kings already had a biography, that the series ventured into new territory although Methuen had already announced a long-term plan to publish biographies of these later monarchs. Perhaps this is appropriate: an American publisher, Yale, is taking the series into the period when Britain was colonising the North American continent and these were the monarchs during whose reign this occurred.

Reading chronologically, this is the last biography in the series. No information is available on possible biographies of the seven following monarchs: William IV; Victoria; Edward VII; George V; Edward VIII; George VI and Elizabeth II. However, before that is considered, Yale still has some work to do filling in the remaining gaps. See the Future Releases page for details.