In the  ‘forthcoming’ lists in the early Methuen English Monarchs books of the late 1980s, Professor A.L. (Alfred Lawson) Brown (1927-2006), Edwards Chair of Medieval History, University of Glasgow, was credited as preparing a biography on Henry IV for the series. Brown was doubtless chosen at the time for his prominence in the field of Henry IV studies and for the wide acceptance of a view he pioneered among contemporary historians that Henry was a weak king led by his supporters. This view is now out of date. Fortunately we have a new book with new views on Henry IV. It is not recorded in Chris Given-Wilson’s new book on Henry IV if Brown gave up the commission for the book, or if it was his death in 2006 that rendered it unfinished. Neither does the new author mention how long he had worked on his biography of Henry IV. The 2016 publication date suggests that he might have inherited the mantle at Brown’s death eleven years beforehand, though longer periods of preparation are possible: Professor Carpenter had been working on his Henry III book since at least 1989 and it was published in 2020, thirty-one years later.

This new book by Professor Given-Wilson, published in February 2016 (April in the USA - the American release dates are usually a couple of months behind those of Britain), discusses primarily the thirteen years of Henry’s reign, rather than Henry’s earlier experiences when Richard II was king. The text is separated into five chronological sections, only the first of which examines in about one hundred pages Henry’s life up to 1399 and his usurpation of Richard II. The remainder of the book, another massive 400 pages, describes the remainder of Henry’s life in minute detail and analysis. Readers continuing here from the Yale Richard II study by Professor Saul will be familiar with these first hundred pages and may skim through this section to get to the real purpose of this book - the rule of Henry IV.

This is a vastly overdue addition to historical research, not just for the English Monarchs series but for medieval history writing in general. As the author notes in his introduction, Henry remains “...the most neglected of England’s late medieval monarchs”. He adds that most historians have skipped Henry IV in the rush to look at the dazzling feats of his son Henry V or the “self-destruction” of Richard II. In the Twentieth Century only J.L. Kirby’s 1970 biography and Ian Mortimer’s 2007 biography have been available. Even the popular 1970s history series ‘The Kings and Queens of England’ edited by Antonia Fraser, in which nearly every monarch from William the Conqueror until the modern day had a volume, denied Henry IV a book.

Professor Given-Wilson emphasises, for those not familiar with the nature of these Yale publications, that this is a political biography, not a history of England in the period. The author gives no mention of the publication staff or editor. It is assumed that Robert Baldock was the commissioning editor. He is named in the following book, ‘William the Conqueror’ released in October 2016, eight months after Henry IV and both books had been in preparation for many years. By the time of the publication of 'Henry IV', Heather McCallum had become Managing Director and Yale UK and was the editor of this and other books in the series. She has advised elsewhere that Henry IV was one of her titles.

A small piece of detail needs correction - the American Yale site has an image of the cover of the hardback edition naming the author Christopher, while the British site has an image naming him Chris. The latter is correct as this is the author’s name on the title page and the British book cover. This was corrected for the paperback copy.

* The ebook version in Amazon USA is an eTextbook not the standard Kindle. 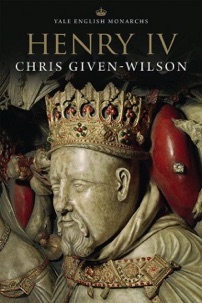 Reviewing the book in The English Historical Review, 2017, Vol. 132 (556) Andrew M. Spencer (Murray Edwards College, University of Cambridge) was very complimentary. "It is well written and superbly well researched, but the author wears his learning lightly so the general reader and students will feel as comfortable reading this as scholars.” The key observation in this review is that "What comes out particularly well is the difficulty of the situation which Henry faced, especially in his early years, and Given-Wilson’s narrative weaves this together expertly to present the reader with the starkness of Henry’s position and, consequently, the extent of his achievement in stabilising his regime.” The only quibbles made about the book are that it is over-long for undergraduate students and that the thematic chapters, about two-thirds into the book, break up the narrative, though he does admit "that these are relatively minor quibbles in what is a very fine achievement indeed."

Writing in History, January 2017, Vol.102 (349) Anne Curry (University of Southhampton) wrote, "...we have thirteen years of an eventful reign superbly and definitively treated...The real value of Given-Wilson's book is the excellently integrated narrative and superb analysis across the whole life and reign. It covers so many areas that it will certainly be a 'go-to' book for all interested in or researching any aspect of the period".

2016 was a busy year for Yale for English history. Henry IV was the first of five 2016 titles listed in these pages. Soon after Henry IV, Yale published biographies of Louis the Lion (April/June); Henry the Young King (June/September); and Æthelred II (September/November); with William the Conqueror (October 2016/January 2017) being the English Monarchs series book to follow Henry IV. These were followed soon after by Cnut the Great in 2017 (February/March).

Prior to this book the only modern biography of Henry IV in print was the 2007 published ‘The Fears of Henry IV’ by Dr. Ian Mortimer. Thank you for filling this gap Dr. Mortimer! This is a high quality biography and also worth having in your history collection, although Given-Wilson comments that it is not as strong on the period of Henry as King. This book is mentioned here as a thank you for serving as the only accessible modern academic standard account of this king prior to this new Yale book.

Both authors discuss the paucity of biographies of Henry IV and Mortimer, in particular, surveys in his introduction the poor regard held by earlier historians for Henry. He continues in a spirited defence of the art of biographies of historical subjects, particularly prior to the 15th Century, a topic which will have particular resonance for readers of the English Monarchs series. Dr. Mortimer has a website with a page on how he wrote his Henry IV biography, showing the difficulty of preparing a text such as any we are exploring here. His experiences of writing his history text must be the same for all the writers of this series.