◀ Go back one king   Go forward one cousin ►

Published by Yale in hardback in Britain in November 2010 and in the USA in January 2011; then paperback in 2012. This was the first Yale English Monarchs book to have been commissioned by Yale, or at least the first published. The previous title, Edward II, had been in preparation for decades. The author thanks Robert Baldock as the commissioning editor in the Acknowledgements page and notes that the book had been in preparation for a few years, or in other words since Methuen had passed the series to Yale in the middle-1990s.

While this book examines Stephen’s rule it also looks at Matilda. Stephen’s story is one of a long and sad military and political battle where there were no winners. For a book focused on Matilda the best recommendations would be Catherine Hanley's Yale book  'Matilda: Empress, Warrior Queen' (2019 - see the next page in sequence) or ‘The Empress Matilda : Queen Consort, Queen Mother and Lady of the English’ (Wiley-Blackwell, 1991) by Marjorie Chibnall (1915-2012). These ancient adversaries have very co-operative biographers. Professor King acknowledges the assistance given to him by Marjorie Chibnall for this book, and over fifty years generally.

David Bates (University of East Anglia) wrote in The English Historical Review, Vol. 127, No. 526 (2012) commenting that Edmund King’s view of Stephen, a culmination of a lifetime’s study of the period, is sympathetic but "fundamentally critical”. Bates, a Norman scholar himself, found though that the treatment of the narrative sources is somewhat Anglocentric, “with the treatment of Normandy being episodic and never more than conventional.” He comments that “…much of the story is told with great gusto…but there are also times when political narrative rather than biography seems to take over as we are asked to follow Stephen as as he dutifully toils around his troubled kingdom and duchy.” Bates concludes his review by saying that “The Book’s careful and well-written narrative supplies a good basis to pose questions about why the reign really matters."

Lawrence W. Marvin (Berry College, Georgia) reviews the book in The Canadian Journal of History, 04/2012, Vol.47(1). He makes the overlooked observation that "Readers may be disappointed that Stephen takes a back seat to events in this reign, but those unfamiliar with the era will find that in some cases the supporting players turn out to be more interesting than the titular subject". He praises the book, conclulding that "King has produced an effective account of the man and his reign that will hold up for a long time" adding that Edmund King depicts Stephen "pretty much as his twelfth-century contemporaries did" and that this is the place to start reading about King Stephen. 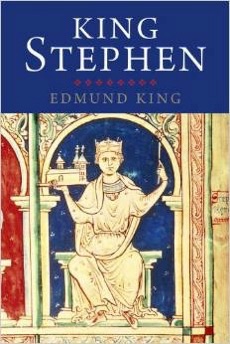 Cover: From the Historia Anglorium by Matthew Paris, c.1250. Held by the British Library.