An early attempt was made to write a biography of this king for the English Monarchs series. A book on Æthelred II by Professor Simon Keynes (1952-  ) of the Department of Anglo-Saxon, Norse and Celtic, University of Cambridge was foretold in 1989 in the “In Preparation” list on the rear cover of Edward the Confessor, but it never appeared. No doubt his book on Æthelred was unready.

Nearly thirty years later, in 2016, ‘Æthelred the Unready’ by Dr. Levi Roach was published by Yale. However there is a problem in considering this new book as part of the English Monarchs series. The Yale websites (US and UK) do not list this as part of the series. An early addition of this book the list of series titles on the UK Yale University Press website was soon removed, so some thought was given to considering the book as part of the series. Nevertheless, a series attribution is not given anywhere in the book. It must be concluded that Yale did not publish this book with the intention of it being in the series, something of an oddity.

Curiously, apart from the listing on the Yale website, the only mention in the 2016 releases ‘Henry IV’ and ‘William the Conqueror’ regarding the series is a statement on the rear of the dust jacket. Devoid of this dressing, the hardback copies of these books have no mention of the series. Some earlier titles have a handy list of English Monarchs titles (ie. in print) but this is absent from these books. A series list was also absent in the 2020 release of Henry III. The paperback copies of series books sometimes have a more visible series label as it is included on the cover. As if to confirm the non-series status the paperback of Æthelred also has no mention of the series.

Therefore it must reluctantly be acknowledged that this book falls into the category of a companion title rather than in the series itself. Given the lineage of this book and the connection to the original title promised in 1989 this release must be considered a worthy entry and it is expected that readers of the series would buy this book and add it to their collection, placing it comfortably between Sarah Foot’s ‘Æthelstan’ and Timothy Bolton’s ‘Cnut the Great’.

Even more confusingly, Internet book vendors are listing it as one of the series, so this book will in any case be regarded by customers purchasing this book as one of the series. The niceties of labels on the item itself (or the publisher’s catalogue) won’t trouble most people, only those pedants compiling websites as a homage to the series will be disturbed.

The first chapter of sixty pages examines in some detail the reigns between Æthelstan and Æthelred, especially the nearly twenty year reign of Edgar. This is a very satisfactory bridge between the chronologically previous book in the series, Æthelstan by Sarah Foot, and this work.

The influence of the originally commissioned Æthelred biographer, Professor Keynes, is felt in this new book as Dr. Roach thanks Keynes for his inspirational teaching in the acknowledgements page and dedicates the book to his former teacher.

In reviewing this book, Andrew Wareham (University of Roehampton, London) wrote in History: the journal of the Historical Association April 2018, Vol.103 (355) commenting especially on the use of primary documents. "At the core of Levi Roach’s approach is an excellent study of Anglo-Saxon charters, which guides the reader through numerous diplomas from different archives, and notably uses witness lists to chart the rising and waning fortunes of royal servants and followers at the royal court.” 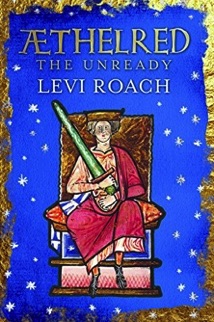 Katherine Weikert (University of Winchester) reviewed the book for The Medieval Review (an Internet review page) at Indiana University (17/11/2018) writes positively: "Roach's writing wears its deep knowledge and understanding lightly, giving readers an accessible glimpse, grounded in firm scholarly foundations, of the ever-enigmatic king." She adds a note about the series itself: "By virtue of being a part of the vaunted Yale Monarch series [sic.], this book will remain a standard text for decades, and quite happily, it is a book that deserves to be thought of that way."

This biography of Æthelred was one of five English Monarchs or “Companion” books released by Yale in 2016. Biographies of Henry IV; Louis the Lion and Henry the Young King were released earlier in the year (in that order). William the Conqueror followed in October, a month after Æthelred. These five were followed early in 2017 by Cnut the Great. With the publication of Cnut in 2017 we can for the first time realise the aim of the founders of the English Monarchs series and read an uninterrupted account of each era from Æthelstan to John. Then, with the release in a few years of Henry III, this continuity will continue until James VI and I.

Given that it is unlikely that Yale would consider publishing a biography on Æthelred’s son Edmund Ironside owing to the brevity of his seven month reign, the final chapter of this book which, while not a thorough examination, is at least a satisfying read on the legacy of of Æthelred and the reign of Edmund. A similar summary of Edmund can be found in the chronologically next book Cnut. Both summaries link the Æthelred and Cnut histories into a continuous narrative.

The image of Æthelred on the cover is taken from the Abingdon Chronicle, though note how the gilt border differs with every iteration of the book. Which one do you think is the best? Answers by email please!

Lastly, this book was declared the winner of the 2017 Longman-History Today Book Prize, an award given  for "an author’s first or second book, written in English, on any aspect of History”, This annual award is given jointly by the publisher Longman and History Today magazine for books published in the year following 1 October.

Cover: The image of Æthelred sitting on a throne comes from the Abingdon Chronicle (13th Century), Abington Abbey, Oxfordshire.

British freelance graphic designer Jeremy Hopes designed the cover. While credit is not given on the book's dust jacket itself, it is listed in the gallery of work on his website. Hopes was given a credit for designing the covers of two further Yale 'Companion' books released in 2019: Richard III and Matilda, and several other Yale history books including Praetorian, The Bookshop of the World, King Arthur, and

Hannibal: The Life and Legend.

Levi Roach can be heard in the Gone Medieval Podcast of 17 August 2021 at this link. The description of the podcast tells us that "Levi Roach discusses the rule of Æthelred the Unready. Was he as much of a failure as his nickname suggests? And what does that nickname actually mean?"