◀Go back to Æthelstan     Go forward to Æthelred II ►

No Methuen or Yale books exist on most of the kings from Alfred to Harold Godwinson. Æthelstan, Æthelred II, Cnut and Edward the Confessor have a Methuen or Yale biography, but the many kings between these four lack an English Monarchs series book. Nevertheless, there are a number of excellent resources to satisfy those keen on this period. In the Yale books, the reigns between Æthelstan and Æthelred II are summarised in Levi Roach’s Yale biography of Æthelred II. The final chapter of Timothy Bolton’s Yale biography of Cnut summarises the six years of the reigns of Cnut’s two sons, Harold Harefoot and Harthacnut. Below are listed more lengthy accounts of the reigns of these intervening kings. A biography for the remainder of the kings is unlikely given the brevity of their reigns. A note is added to show just how short a time most of them was king. We must hold out hope that one day there may be a Yale book examining each of them in a portmanteau book, of the style of Richard Humble’s book discussed below.

The Saxon Kings by Richard Humble (Weidenfeld & Nicolson, 1980) is a popular history and surveys all the kings from Alfred to Harold and indeed beyond him to the claimant for William’s throne, Edgar Ætheling. This book is the earliest title in the Weidenfeld & Nicolson Kings and Queens of England series (1972-1981).

For a lengthy and more serious study of the period, the classic work remains Sir Frank Stenton’s Anglo-Saxon England (OUP, 1943). The third edition was most recently republished by Oxford in 2001, ISBN 9780192801395

Turning to specific biographies, we find that even today, when just about every crevice on historical study has been scoured by publishers and aspirant authors, much of the Anglo-Saxon period remains under-explored. A small number of biographical studies exist for the interested reader, and these are listed below.

Edmund I to Swein Forkbeard

Edmund I (reigned for 6 years 7 months).

No biography was found for Edmund, successor to Æthelstan and Son of Edward the Elder.

The portraits of these kings come from the Genealogical roll of the kings of England, held by the British Library, Royal MS 14 B VI, dating from the early 14th Century. The full document is described by the Library as “Roll chronicle containing the genealogy of the Kings of England from the Heptarchy to Edward I...in the form of a diagram of interconnected roundels with royal portraits in colours and gold, and an accompanying commentary”.

The image of Sweyn Forkbeard is a late 18th-early 19th century etching supposedly based on a likeness on a coin. Portrait held by the National Portrait Gallery, London . 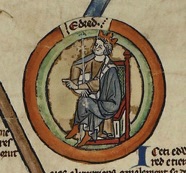 No biography was found for Eadred.

No biography was found for Eadwig.

It’s easy to write a biography about a ruler when there is much conflict, and many sources. For Edgar neither applies, yet Peter Rex has managed to write a well-received book on this forgotten king. Rex is a popular history writer of the 10th and 11th Centuries and has also written several books relating to the Norman conquest. His book Edgar: King of the English 959-75 (The History Press, 2007) ISBN 9780752441245 is out of print and fairly expensive but worth the cost.

No biography was found for Edward the Martyr, but he features prominently in the book by Elizabeth Norton called Elfrida : The First Crowned Queen of England (Amberley, 2014) ISBN 9781445637655. Elfrida (or Ælfthryth) was Edward’s stepmother (ie. wife to Edgar the Peaceful) and mother to Æthelred II. This is an essential read if investigating the later Saxon kings and an appropriate bridge between Peter Rex’s Edgar the Peaceful and Levi Roach’s Æthelred the Unready.

Æthelred II - A Yale biography exists. See the page for Levi Roach’s Yale book linked at the head of this page.

Sweyn Forkbeard (reigned for 41 days - if you accept that he was king).

Although at best king only briefly, he was nevertheless an important actor on the 10th and 11th Century stage. Ian Howard’s book Swein Forkbeard's Invasions and the Danish Conquest of England, 991-1017 (Boydell Press, 2003) ISBN 9780851159287 is an extension of his PhD studies and the writing tends toward the academic reader. The book is an analysis of the military campaign of the Norsemen rather than a biography focused on Swein alone, but this gives it breadth and views the period as a whole.

No biography was found for Edmund Ironside, but a summary can be found in Levi Roach’s Yale biography of Æthelred II, and in the following book on Edmund's son Edgar.

Son of Edmund Ironside, he was elected in 1057 as successor to Edward the Confessor but died days later While his father lacks a full biography, the more extraordinaly story of Edward has been written. Published by Boydel Press in hardback in 1989 (ISBN 9780851155418) and paperback in 2010 (ISBN 9780851157856). The Lost King of England: The East European Adventures of Edward the Exile was written by journalist/historian Gabriel Ronay, Hungarian by birth but resident in England since. The author's homeland was the place of exile for Edward and was himself an exlie in Britain after 1956. 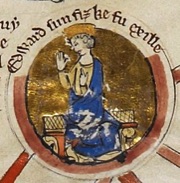 The Missing Books on The Forgotten Kings