Only the second Saxon biography published in the series (Frank Barlow's 'Edward the Confessor' being the first), Sarah Foot’s Æthelstan is also one of the few studies of this king. Yale claims that this is the only ever academic study of him. The hardback was published in July 2011. The paperback followed in 2012. Acknowledgement is given to Yale editors Robert Baldock for commissioning the book, and to Heather McCallum for seeing it to completion. This book therefore is a bridge between these two individuals regarding the supervision of the English Monarchs series. From this 2011 book Heather McCallum has an increasing influence in the series, and was to become Managing Director of Yale UK in 2015.

Professor Foot’s task in tackling a biography of Æthelstan was perhaps the most difficult, the subject the most elusive in the English Monarchs series. Dr. Rory Naismith of Clare College, Cambridge reviewed this book citing her work as one “pieced together from scraps and fragments”, going on to say that the work is a collaborative one building and embellishing on the work that has been done by previous Æthelstan scholars. This is another example of a book in this series pushing the boundaries of scholarship in the most difficult of circumstances.

The book’s 250 pages of text belies the length of time required to read this title. Sarah Foot has provided the series with an intense study of Æthelstan with great detail and a plausible cause and effect analysis of every aspect of this reign. Her insights of the importance of religion to Æthelstan and the political benefits this brought to the king are deeply thought out. Her text is perceptive and analytical and takes careful reading to absorb a fascinating account of a period where most observers would have thought the sources unyielding of information. Her section of the significance of coins is a good example and many pages are used to draw conclusions about Æthelstan’s reign based on the minting of coins in different parts of the kingdom.

Professor Foot emphasises that the usual tools available to a biographer are not applicable in this study and the only alternative is to write about aspects of Æthelstan’s reign in isolation, bringing them together in the course of the book. Therefore she divides the chapters of the book into an analysis of family, court, church, kingdom, war, and death.

The influence of long term subject area specialist Professor Simon Keynes is felt in this book. Sarah Foot acknowledges the assistance given by Keynes, as does Dr. Levi Roach in his Æthelred biography, chronologically next in sequence. The author further acknowledges the assistance of well-known historian and media presenter Michael Wood, which creates an opportunity to recommend his landmark TV series In Search Of The Dark Ages from 1981. The episode on Æthelstan was one of the key moments in the eight episode series, which is essential viewing for all enthusiasts of the early kings.

The book was well received. Tracey-Anne Cooper (St. John’s University, New York) wrote in The Journal of World History, Volume 24, No. 1 (March 2013) that this book “…places this under appreciated monarch firmly in his rightful position”. In addressing its approachability she added “The monograph is also highly readable: it is accessible to the keen nonspecialist and is a strong example of biographical methodology”.

Ann Williams writing in History: Journal of the Historical Association, Volume 97 (Number 326, 2012) commented that the thin sources are always a problem for writing early history but this book "...exemplifies what can be achieved by close attention both to what the sources say and what they do not. It is a formidable achievement, and one which illuminates not only Æthelstan's character and achievement, but also the beginnings of the English kingdom."

In an October 2001 review at the online Reviews in History magazine, Dr. Rory Naismith (Clare College, Cambridge) observes that in recent writings "...Æthelstan’s reign comes across as a time of innovation and reorientation of power, creating a model for his successors" and that Professor Foot's book "...expands substantively on previous scholarship." Naismith concludes saying of the author that "Hers is the culmination, it would be fair to say, of a collaborative effort. In bringing the work of previous scholars together and arranging and juxtaposing their scattered contributions intelligently – with her own important observations as well – Foot has shed much-needed fresh light on the ‘First King of England’’s life, times and works." He adds that this is also a book for those outside the small academic fraternity already familiar with historical research in this era.

Professor Foot is a Canon of the Church of England at Christ Church Cathedral, Oxford. We can describe her book in the English Monarchs canon as one of a very high calibre. 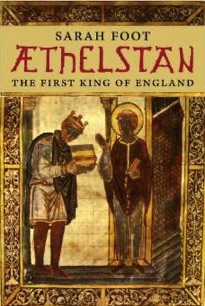 Cover: This is the earliest royal portrait. It comes from an illustration in Bede’s ‘Life of Saint Cuthbert’ and depicts the king  presenting a book to the saint or reading it. Interpretations differ.

Æthelstan: The First King of England

Museum tip: When visiting or travelling near Malmesbury be sure to spend some time at the Æthelstan museum and the king's tomb at the nearby Malmesbury Abbey.