For this early entry in the series Frank Barlow ventures far back in time to the Saxon days with this 1970 Eyre Methuen/California release. It was reprinted by Methuen with minor revisions, as a paperback in 1979 and again by Methuen as both a hardback and paperback in 1989 - mistakenly called the “Second Edition” in the author’s new introduction, but not in the verso. In the US, California printed the paperback in 1985 and Yale republished the hardback and paperback in 1997 with new material, an updated bibliography and a brief introduction by the author in which he notes that since the slight revisions in the 1979 paperback printing no new primary sources have been discovered. He further comments that the great area of growth in studies of the period is in secondary sources. He adds that “.. some of the accounts, however, seem to belong more to romance than history”. Professor Barlow mentions in the acknowledgements the generosity of series editor David Douglas who asked him to write this biography even though he was considering writing it himself.

The Yale printing omits the eight page 'Appendix F: Some Unpublished Royal Charters' but includes a new five page 'Biblographica Addenda' of 'Some publications mostly since 1979', which follows the reprinted 'Select Bibliography'. The genealogical table in the Methuen printings is a fold-out page inside the rear cover, approximating four pages in width. This is the only occasion of a fold-out piece in any series book.

T. Sandquist, (University of Toronto) reviewed this book in The Canadian Historical Review, Volume 54, Number 3, September 1973, pointing out that "The only previous scholarly biography of Edward the Confessor is that incorporated in E.A. Freeman’s History of the Norman Conquest’ (1876-79) and that “Finally, Barlow has succeeded in writing a biography and history of the reign that is not a prelude to the Norman Conquest. This, in itself, is no small accomplishment.”

D.L. Farmer (University of Saskatchewan) opens his review in Canadian Journal of History, 12/1972, Vol.7(3) that Edward is an enigma but that "with surgical skill Professor Barlow cuts through this confusion...He provides a consistent and coherent interpretation of the reign". The concluding remark, found so often with books in the English Monarchs series, is that the book will gain acceptance as the standard work on Edward the Confessor.

The original Methuen hardback notes that this is the fourth book in the series (after William I, James I, and Henry VIII) confirming that the now deleted James I was in fact part of the series. Until 2011 when Sarah Foot’s ‘Æthelstan’ was released, this book on Edward remained the only English Monarchs biography of a Saxon king. It might reasonably be argued that forty years is too long to wait for another study of that period.

Professor Barlow also wrote the biography of William II in this series and he would go on to write a further notable biography on Thomas Becket, published by Weidenfeld & Nicholson in 1982 which is still available in paperback. See this link.

Fifty years after the publication of this book Yale will publish its successor, 'Edward the Confessor' by Professor Tom Licence. This new book, for release in August 2020, updates Frank Barlow's title. For the time being both books are included on the list of series titles, though the assumption that Barlow's book will be retired is inescapable. 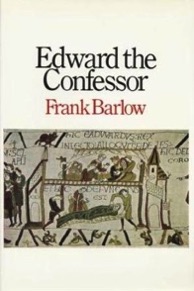 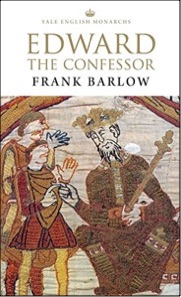 Cover: All covers are from the Baueux Tapestry, held by the Bayeux Museum, France.

The Methuen and UC covers are from the scene depicting the death of King Edward.

The Yale covers are from the start of the story where King Edward is talking to his brother-in-law, Harold Earl of Wessex, who features more a bit later on.