Go to the next book to be published in the series

Last of the Royal Blood

Yale quietly added this book to the list of series titles for publication only a few months before its publication in August 2020. The author has been at the University of East Anglia for the past decade, firstly as Senior Lecturer in Medieval History and then, from 2019, Professor. His prior post was as a research fellow not far away from Norwich at the University of Cambridge - where he gained his Master's degrees and a Ph.D in Medieval history.

Tom Licence's book is the fourth book to revisit a monarch with an existing book in the series - if you include Michael Hicks' Richard III (2019), not considered part of the series proper. Three of the first four books in the series have been or will be replaced by newer works. Of these four only Henry VIII (1968) remains to be replaced or updated.

This new book also confirms the trajectory of the series. Yale has set a course to revisit the books in the series to keep it fresh and relevant. Each author of the new titles has been sensitive enough to attribute to these early titles the significance of the work and their pioneering nature. Professor Chrimes in his 1972 biography of Henry VII, was the first to admit that his book was but a survey of Henry's reign and a preliminary one at that, with the expectation that given enough time a further book with more detail would follow. It seems reasonable then to expect Yale to continue to update the earliest biographies issued in the series. In this book the list of series titles includes both Edward the Confessor books; the 1970 Frank Barlow book and this new 2020 release. This is a unique statement indicating that the Tom Licence Book augments and updates the Frank Barlow book which is neither retired nor replaced.

In his introduction Tom Licence sketches the outline of his book and informs the reader that it is a reassessment of the sources used by Frank Barlow and others to come to a new and up to date view of the subject king. It is a robust examination of the bias and prejudice of the earlier views of Edward and how this was shaped in modern times, especially by the outlook of Victorian-era writers and from which Frank Barlow's perspective was formed. The author invites the reader to explore the life of Edward and states his style as early as the second page "The biography of a king, however, cannot be a study of kingship, and it should be more than a history of a reign. It is quite simply the study of a man who became king, and of how the office became him. And since 'no man is an island' - particularly no king - it is the story of those around him: mother and father, wife and in-laws, those who helped and those who resisted him."

In particular, Licence examines and challenges three aspects of the reign which previous bipgraphers have taken for granted. He summarises this at the commencement of his concuding chapter as he reviews his discussion: "The first, that Edward never strived for the throne; the second, that he was ruled by his in-laws; the third, that he dangled the succession before multiple contenders." His discussion steming from these three points transforms the impression the reader has of Edward. This new biography of Edward the Confessor is not a traditional linear  description of a reign but rather a discussion of Edward's kingship and a re-evaluation of past descriptions of the king. For that reason it is an augmentation of the Frank Barlow biography and the pair stand as a joint examintion of this king's crucial period on the throne. This is a unique situation in the English Monarchs series, yet one which may be repeated in future Yale books on monarchs who have long had a place in the series. Let's hope for more of the same in the future.

Although this is the author's first English Monarchs biography his name will have been seen in an English Monarchs book by readers with a retentive memory and an eye for detail. In the preface to his English Monarchs biography of William the Conqueror David Bates thanks Licence for his assistance and comments "...on the book's narrative and analysis". Both Bates and Licence hold posts at the University of East Anglia. Likewise, Tom Licence acknowledges the assistance of David Bates, a reminder that scholarship is a collegiate effort relying on peer review and critical interaction. Other academics known to series readers and thanked in the preface are Sarah Foot (author of Æthelstan); Simon Keynes and Levi Roach (the first being the intended Methuen author of Æthelred and the second the ultimate author of the Yale book); Stephen Church (a 2016 biographer of King John); Pauline Stafford (Professor Emerita of Early Medieval History, University of Liverpool) author of many texts on early medieval women including Queens Emma and Edith - which is to say the Confessor's queen; Nicholas Vincent, a prominent 12th and 13th century academic author, and several other professional colleagues.

The new Edward the Confessor was released in the UK on 11 August 2020 and priced at £25.00. It was published in North America on 29 September 2020 priced at $35.00. The cover, released by Yale, is a new style for the series. As was the case with its immediate predecessor Henry III, the kingly subject has few images to his name. This has necessitated a more creative piece of art to fill the gap. In the case of the Henry III book the artwork used was a treated graphic based on Henry's tomb effigy. For Edward the Confessor a stylised title on a striking red background has been created, with a small figure representing Edward peeking out at the foot of the cover and pointing to his name in the title. This is extracted from the first scene of the Bayeux Tapestry and was used in the Yale reprints of the Frank Barlow biography of Edward.

This new Edward the Confessor biography has a cover with a fresh modern look, not unlike Max Adams' book 'Aelfred's Britain: War and Peace in the Viking Age' (Head of Zeus, 2017). Both use a red and gold colour scheme with the title presented in a styllised font. Head of Zeus also used complementary covers on other Max Adams books: 'The King in the North' (2013); 'In the Land of Giants' (2015); and 'The First Kingdom' (2020). Perhaps this will become the classic style of this period of publising? This new style is an interesting development and is simlar to the creative solution to the problem of lack of relevant images of the subject of biographies. As observed in the note above regarding the cover, this is the fourth Yale book in the past few years, either in the series or one of the 'Companion' titles, for which a graphic designer was engaged and the least reliant on existing imagery of a monarch.

In his preface the author notes that the book was commissioned in 2013 by outgoing Managing Director Robert Baldock, and thereafter edited by Heather McCallum. The paperback version is scheduled for 12 October 2021 with the same cover as the hardback, save for a new endorsement by historian Leanda de Lisle rather than that of David Bates which graced the hardback.

Cover: A new style of cover for an English Monarchs book. The graphic of Edward in the bottom corner is from   the very first panel of the Bayeux Tapestry showing that Edward sends Harold to visit William of Normandy.

On the rear dust jacket flap credit is given to Steve Leard for the design. Leard is a British freelance graphic designer whose other work can be seen at his website.

Edward the Confessor is available  from many online vendors - some are listed here. Prices are approximate and in local currency. Better still, call at your local bookstore to place an order.

*Australian vendors have the book priced at around $75

*EU stores have the book 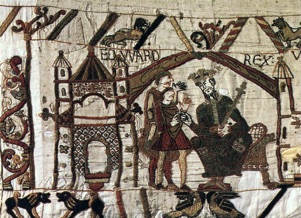