Detour to Charles VII of France

Reader in history, University of Exeter

Henry VI was published by Methuen in hardback in February 1981, then paperback in 1983. It did not have an American publisher at this point. Yale reissued the paperback in 2001. The 1981 hardback is difficult to find and grossly overpriced when located.

In the new introduction to the 2001 Yale edition, Professor John L. Watts (Corpus Christi College, Oxford) describes the trajectory of this biography and includes a commentary on the views of Bertram Wolffe expressed in this book. Professor Watts expertise is the political history of late medieval England, specifically the reign of Henry VI who he described on his website as "a famously useless king, who came to the throne as a baby and ruled with astonishing inertness for a further thirty-nine years". Reading Professor Watts’ introduction is essential in understanding this biography and Henry VI, which he calls controversial. He describes Wolffe’s book, while instrumental in re-energising analysis of this period, as a mistaken piece of revisionism. His analysis is too lengthy to be repeated here but in essence the 1981 publication of this book came rather too late for its early 1970s research, by which time historical debate had moved on and Wolffe’s views were out of date. Additionally, Watts says Wolffe was mistaken in his depiction of Henry as central to the mistakes of government rather than a ‘hapless bystander’ which is the conventional view of Henry VI.

Watts praises the book as “...the first substantial modern attempt to make sense of the politics of the reign” and a book which still has influence today. His fundamental point is that while this work of research in the 1970s is seen today as flawed and a piece of rejected revisionism it will still provoke thought and debate about this reign. That is a good thing. That is the essence of an English Monarchs title.

R.B. (Barry) Dobson (University of York) in The The Journal of Ecclesiastical History, Volume 34, number 1 (1983) took the opportunity to review simultaneously the two 1981 biographies of Henry VI, by Bertram Wolffe and Ralph Griffiths, comparing their views and focus. He points out that these two books are the first since the very inadequate biography of the king by Mabel Christie in 1922. Dobson wryly describes these two books: "one substantial and one positively immense" - Griffith's book is over 1000 pages in length. While Wolffe offers "...a more unified and coherent narrative drive, Dr Griffiths is able to present a much broader canvas, including important discussions of the Scottish and Irish problems and even of topics as neglected as the aliens in the realm". Dobson also mentions the differences in the view of Henry VI of these two scholars. "Dr Wolffe...[loses] patience with the last Lancastrian and portraying him as, at times, a malevolently wilful king, 'a dangerous compound of forcefulness and weakness'. For Dr Griffiths on the other hand Henry VI emerges in his more traditional guise as a man too gentle to govern, a well-intentioned but often inane monarch whose greatest political defect was his 'naively defective judgement'."

Wolffe has an unusual note in the acknowledgements page of the original hardback printing (subsequently deleted) in which he comments that "Writing a biography of such an insubstantial and unsucessful king as Henry VI has been a long and sometimes dispiriting task", and goes on to note the encouragement of his wife - and gives her credit for the index to the book.

The book’s reception is discussed above, but one formal book review in the scholarly journals of the time should be highlighted. G.L. Harriss (Magdalen College, University of Oxford) in The English Historical Review, Vol. 97, No. 385 (Oct., 1982) is rather gentler in critiquing Wolffe, with comments such as, “ it is not as easy as Dr Wolffe assumes to ascribe the handling of the crisis to Henry himself, although his intervention and attitude are certainly not to be minimised” and "Dr Wolffe insists that we should not look for shadows behind the throne; yet contemporary opinion explicitly alleged that Henry was manipulated for their own ends by others, whom it named."

A parallel biography of king Charles VII of France was published by Methuen in 1974. Charles VII and Henry VI reigned almost exactly at the same time. Charles VII was the first of Methuen's French Monarchs series. It was also the last: the series was terminated after this one title, and even the English Monarchs series had to wait a further seven years before the next new book. See the Charles VII page for more details. 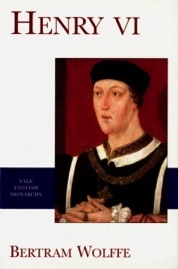 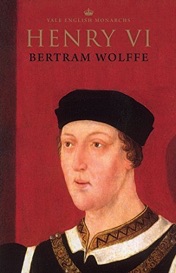 Cover: The cover art for the Methuen book is attributed on the rear fly-leaf thus: “The picture on the front of the jacket is a portrait of Henry VI from the diary of Jörg von Ehingen who had an audience with the king, probably in 1458. The fifteenth-century German script reads: ‘Henry, by God’s grace King of England and in France, Lord of Ireland’ (reproduced by permission of the Württembergische Landesbibliothek, Stuttgart.)" This collection is the State Library of Württemberg.

The Yale cover is a portrait held by the National Portrait Gallery, London.