Charles Ross is another author with two entries in the series, the other being the sequel to this book - Richard III. This first book is the longest. Professor Ross is unique in this series in being the only author to have written studies of two consecutive kings. Edward IV was published in hardback by Methuen in 1974 and California in 1975, then in a Methuen paperback and hardback in 1983. Yale republished the hardback in 1997 and the paperback in 1998.

Charles Ross states at the outset that this book is to be a study in power-politics of late medieval England. Edward’s reign sees much drama, seizures of the throne, exile and ultimately the end of the Yorkist dynasty. Ross sets himself the task to “provide an explanation of these violent changes of political fortune”. He does not hold back on criticism of Edward, but is also is quick to highlight his virtues. It is a bold and lengthy examination of the end of the ‘Wars of the Roses’. For medieval specialists this book must rank at the top of the English Monarchs series.

B.P. Wolffe (University of Exeter - and author of the English Monarchs biography of Henry VI) is generally approving of this book in his review from The English Historical Review, Volume 91, No. 359 (April 1976), describing it as an “...intriguing study in depth of Edward IV and his age...a very readable, moderate-length book which will become the new standard account of Yorkist England." He does have some specific reservations, citing some differences in approach to this period of English history when compared with S.B. Chrimes' study of Henry VII. While Chrimes’ account relied on presenting Henry’s government in relation to institutions, Ross “...offers a book of politics and patronage slanted away from the institutions of government” and "this latest picture of Yorkist England is recognizably backward-looking and medieval…The impression is therefore that the factors in English society most stressed by Dr Ross ceased to be important overnight with Henry VII's accession”, which he adds is an explanation which does not satisfy a skeptical historian. Wolffe’s conclusion is that "Dr Ross's book does not explain how this had come about or indeed suggest that it had done so.” Wolffe further comments that the paradox in Edward, as described by Ross, "the serious failings as a politician which he finds in Edward IV appear irreconcilable with his undoubted successes in government” is an historian’s artifice.

Michael Altschul (Case Western Reserve University, Cleveland, Ohio) reviewed the book in Speculum, Volume 52, No. 3 (1977). "The broad outlines of the story are well enough known; what gives bite and special distinction to Ross's treatment is the essentially negative judgment on the quality of Edward's reign that underlies it." He finds, though that Ross might be a little harsh, "Ross is, perhaps, unduly critical. The controlling contrast should not always be with the early Tudors, but with Henry VI. Edward's failings are stressed, with increasing urgency; and the point is well made that these failings are less understandable or excusable after 1471 than in the 1460s."

The Yale printings have an extensive new forward by Ralph Griffiths, not an author of any work in this series but a serious historical biographer whose most significant work is the “magisterial” Henry VI for Earnest Benn publishers in 1981 with an unchanged paperback printing by Sutton Publishing in 1998. Readers of the English Monarchs series will also enjoy this work. Griffiths assisted Ross in reading the text before publication for which Ross gives credit in the acknowledgements page. In this small way Griffiths too is a contributor to the English Monarchs series.

For those reading through this website chronologically, this book was followed by an attempt by Methuen to commence a similar series of biographies of French kings. 'Charles VII' by M.G.A. Vale was published at the end of 1974 and was the first of what was promised to be a series of at least ten books. None of the 'forthcoming' nine were published by Methuen, although three of them ultimately issued by other publishers between 1982 and 1992. See the French Monarchs Series page on this website for further details.

As with a few other monarchs in the series there are some biographies of their queens worth seeking out. ‘Elizabeth Woodville: Mother of the Princes in the Tower’ by David Baldwin (1946-2016) is a 2004 biography of the first Queen Elizabeth. Another option is 'Elizabeth Wydeville: The Slandered Queen' (2005) By Arlene Okerlund. 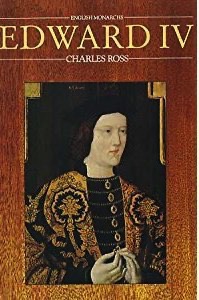 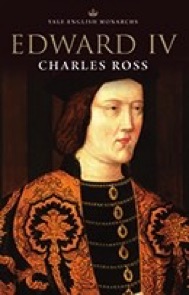 Cover: A portrait owned by the Royal Collection. Thanks is given in the book to the Queen for its use. See this link.