Perhaps the most well-regarded book in the series was one of the earliest, appearing in 1968. It was the first in the series to be published by the newly renamed publisher Eyre Methuen. The ‘Edward the Confessor’ hardback of 1970 lists Scarisbrick’s ‘Henry VIII’ as third in the series, after ‘William I’ and ‘James I’. It was listed as forthcoming on the jacket of the first book in the series, ‘William the Conqueror’ in 1964, and took another four years to see print. This title enjoyed a paperback printing by Penguin subsidiary Pelican* in 1971 (where it was included in the ‘Pelican Biographies’ series), California in 1972 and Methuen in 1976. Methuen reprinted the hardback in 1990. Yale published it in paperback and hardback in 1997 with no change to the text. Although Scarisbrick’s book on Henry VIII is now fifty years old, it remains the classic work on this king. The previous standard work was by A.F. Pollard published in 1905, which remains an important study, but with many views no longer accepted by modern historians. Pollard is better remembered today as major force in establishing history as an academic subject in Britain.

While John Joseph "Jack” Scarisbrick’s biography has for many years been spoken of as the definitive work on Henry VIII,  the author confesses in the introduction to the Yale paperback reprint of 1997 that he has now changed his views on certain areas of the work. In the introduction Professor Scarisbrick discusses his evolving views on Henry and mentions a few points on which he would write differently, mostly to give less space to European diplomacy and a revision of his view that Catherine of Aragon’s marriage to Henry being canonically suspect. He mentions that his more favourable view of Wolsey than was current at the time of the book’s writing has now become more accepted and refers readers to Peter Gwyn’s 2001 biography of Wolsey for this modern rehabilitated view.

The book is certainly highly detailed with regard to Henry’s arguments for divorce (the first one), the religious theology involved, and the relationship with Rome and the European powers. This has the effect of reducing the discussion about the conditions in England during the reign, leaving a minimum of space to examine Henry’s six wives, the court and English politics. Anne Boleyn’s demise is given just a few pages for example. Some readers therefore will find this account “top heavy”, leaving unanswered some questions about the situation in England. These might be reasons for a replacement book in the series in the fullness of time. Study of the Tudors and Henry VIII has progressed since the publication of this book in 1968. More recent historians, iconoclasts and conventional alike, have continued the discussion about the potency or otherwise of Henry with regards to Europe, the position of the Catholic church, the very nature of the reformation and so on, but this work remains one of the central works in discussions of the period.

Professor Scarisbrick went on to be the consulting editor for the English Monarchs series for many years. He was still listed as consulting editor in the 2000s but no longer holds that position. The 2003 paperback reprint of Henry I is the most recent mention of him to be found. Oddly, he fails to get this credit in the 2001 hardback copy of the same book, and it does seem that the only acknowledgement of the Consulting Editor in the Yale books was given on the rear cover of the paperbacks.

The book was an instant classic. It was reviewed in the English Historical Review, Volume 86, No. 339, (1971) by P.R. Roberts (University of Kent at Canterbury), being described as a "subtle masterpiece of iconoclastic history”, precisely what you’d want in an English Monarchs book. Roberts wrote that Scarisbrick’s portrait of Henry concluded that his "most cherished policies ended in extravagant failure”and he was a colossus who "did not straddle his world, but strutted ineffectually on the corner of it”. 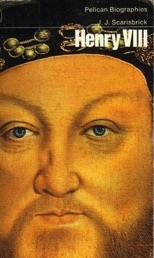 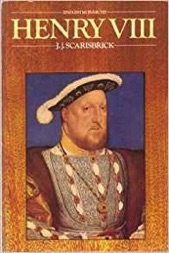 The most lasting observation of the work in the 1971 review was that it should be seen as "a vindication of the genre of political biography” and "a magistral study of a man and his works on the grand scale, one of the most important single contributions to the history of Tudor England written in this century”. For the English Monarchs series this is a key work. It was a indication that this book belonged to a series comprised of serious works, not the sort to be seen on bedside tables. It was confirmation that a new era of political biographies was underway and, as part of a new series, an indication of great things to come. After starting with William the Conqueror, arguably a less sought after subject for readers than monarchs of later ages, followed by a lesser work on James I, the series was in need of a title which would simultaneously grip an audience and unequivocally define the high quality of the English Monarchs books. This book delivered those requirements and handsomely so. Make no mistake - this is an absorbing read, created by a leading scholar of the period at the height of his powers.

Wallace T. McCaffrey - himself a Tudor scholar - notes in The American Historical Review Volume 74, Number 2 (1968) that the Scarisbrick biography of Henry VIII supplants the previous standard work by A.J. Pollard [of 1902]. While Pollard's work was not his finest, says McCaffrey, it viewed Henry as the instrument of larger historical forces. "Scarisbrick has reversed Pollard's order of concern, beginning with the man himself, Henry Tudor, and working out from the royal person to the wider ranges of historical environment. His judgements on that environment are careful, fully informed, and never superficial."

The author is one of four English Monarchs series authors to have presented papers in the Ford Lectures in British History at the University of Oxford. Scarisbrick’s presentation was in the 1981–82 academic year where he presented his paper 'Religious Attitudes in Reformation England’, which was related to his 1984 book ‘The Reformation and the English People'. The other English Monarchs authors to present Ford Lectures were Professor David Douglas who delivered his book on William the Conqueror in the 1962/63 academic year prior to its publication in 1964, David Mathew in 1945/46 (but not on his James I book) and Professor David Bates in 2009/10 who presented on ‘The Normans and Empire’.

Yale collectors and Tudor specialists will want to purchase a copy of 'The Rise of Thomas Cromwell: Power and Politics in the Reign of Henry VIII, 1415-1534' (2015) by Michael Everett, ISBN 9780300207422. The author is a visiting fellow at the University of Southampton. Yale promises that this book "...provides a new and enlightening account of Cromwell’s rise to power, his influence on the king, his role in the Reformation, and his impact on the future of the nation."

Cover: The Eyre Methuen 1968 book, the UC 1972 paperback, the 1976 paperback and the 1990 hardback books use a portrait of Henry, after Hans Holbein the Younger, and held by the National Portrait Gallery. They sell this portrait as a fridge magnet. £4.00 if you please.

The Pelican paperback of 1971 and the Yale reissues used a version of the last portrait of Henry, originally by Holbein. Its history can be found here.

*Pelican was an imprint of Penguin Books, whose mission was to produce inexpensive paperbacks for a broad audience. The imprint was closed in 1984, and, after a thirty year absence, was relaunched in 2014. The Pelican edition of Henry VIII was the standard ‘small’ paperback size without illustrations. It was, though, the full text in a compact size.

Pelican Biographies was a series of twenty-four titles published in the 1970s of which Henry VIII was the only English Monarchs title. Christopher Hibbert’s George IV from 1976 (originally published in 1972 in two volumes) was the only other monarchical biography.

The six covers of Henry VIII