Link to the book's Webpage at Yale

The 1978 printing of this book was reviewed by Carolyn A. Eddie (University of Illinois) in The American Historical Review, Volume 83, Issue 5, (1978). Eddie was not fully persuaded at Miller’s portrait of James. She mentions that half of this book is a study of James before he was king, and as such examines the court of Charles II, and here she has reservations at the way Miller underplays the achievements of Charles II. Edie finds "The background is at some points superficial, the details inexact; still it is a likeness. He has addressed the necessary questions with intelligence and imagination, even if he has not in all cases answered them. The effort is to be commended.” The earlier comment is rather curious - of course the early part of a monarch's life is under the rule of a predecessor. How could it be otherwise? The portrayal of the court of Charles II by Miller is valid - it's his view and a widely accepted assessment of Charles II. This is reiterated in his later (1991) biography of that king.

Miller’s long foreword to the Yale edition discusses the problems of the history of the period, noting that it once was fashionable to look at the civil wars and ignore the period of James II and even Charles II. He also outlines the development of scholarship since the first printing, and where he has changed his own account of James II. This introduction is not in the Wayland or Methuen printings and is unique to the Yale printing.

The Yale printing states that Methuen issued it as the "Second edition" and that Yale's is a new edition (ie. "This edition"). This is incorrect. The Methuen printing nowhere states that it is a second edition. This is another case of a publisher equating printings with editions and assuming that an iteration from each publisher in turn constitutes a new edition. The Yale "edition" is in fact an exact copy of the Methen issue, right down to the page numbers. The only exception here is the lenghth of the notes. There are more four more pages of notes in the Yale version than in the Methuen version. This is to accommodate the notes in the Yale Foreword by Miller - which in itself is unusual; Yale prefers to include the notes on each page of text to which reference is made. In this book Yale breaks that rule clearly in order to use the printing materials sourced from the 1989 Methuen issue.

As mentioned above, Professor Miller also wrote the 1991 biography of James’ brother, Charles II, published by Weidenfeld & Nicolson which is worth collecting, althouugh more as further reading for James II than a book on Charles II. 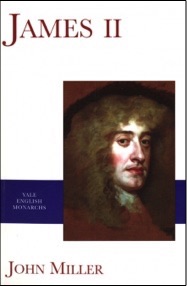 Promoted to the English Monarchs series by Yale in 2000

Cover: The 1978 Wayland edition has a 1690 portrait of James by an unknown painter. Owned by the National Portrait Gallery.

The 1989 Methuen edition has a 1684 portrait by Sir Godfrey Kneller and owned by the National Portrait Gallery.

This book is one of the small number in the series that has seen a multitude of publishers; three in fact: James II by John Miller was first published as ‘James II : a study in Kingship’ by Wayland in hardback in 1978. A reprinting followed in hardback by Methuen in 1989 (with the same subtitle) and paperback in 1991 (without the subtitle). Yale reissued the book in paperback (only) in 2000, unchanged save for a new nine page foreword by the author updating some general themes of the book.

This biography was seen as a refreshingly revisionist view on James II, usually described as absolutist and wanting to impose Catholicism. Professor Miller tells a more nuanced story of a king who didn’t understand his subjects just as they didn’t understand him. It is also an account of the politics and religion of England in the late 17th Century, where the divisions of the early part of the century had not been resolved despite the civil war and restoration. In a ten page foreword to the Yale printing the author brings the reader up to date with a summary of the research done on James II since he wrote the book in the late 1970s.

This book was first included in the series by Yale in 2000 with the issuing of their paperback version. It was not included in the series at the time of its 1978 Wayland printing or the 1989 Methuen reprinting. This is odd. Methuen were still in command of the series in 1989. They had recently issued Edward I in 1988 and would publish one further title, Henry V, in 1992. It’s ironic that they chose not to include their printing of James II in the series in 1989, yet Yale would revisit the title eleven years later with their own reprinting and include it in the series. Might the decision have been made that James II is too late a king to include in a series that hitherto had documented predominately medieval monarchs? This does seem unlikely as Methuen at this point announced plans to publish books for two Georgian kings - Georges II and IV (and eventually published by Yale). These two titles were announced in the forthcoming list in the paperback release of Richard III in 1988, only a year before this James II title. This is more evidence that Methuen's stewardship of the series was  poor by the late 1980s and their interest was waning. Ignoring this book would be bad enough, but reprinting it and not including it in the series is negligence of a high standard.

It also indicates that it was a deliberate decision by Yale to include some already published titles into the series, where appropriate, and that this was not a policy of Methuen in the final years of their ownership of the series. The consulting editor during this period of transition from Methuen to Yale, Professor J.J. Scarisbrick, oversaw the implementation of this decision and no doubt it was his decision which books were worthy of inclusion.