King John has the most diverse publishing history of all these books - and the greatest number of different covers. It was first published in hardback in 1961 by Eyre & Spottiswoode in the UK and W.W. Norton in the USA. Such was the success of this book that Eyre & Spottiswoode reprinted the book during its first year, and again in 1964 with a slightly different cover. This 1964 impression/reprint had a note from Warren advising that he had removed some "misprints and errors" from the text, thanking half a dozen friends and colleagues for their identification. King John was then reprinted in 1966 for the Peregrine books series (a Penguin paperback imprint). Removed from this printing, but not considered worthy of a note, was the set of eight photographic illustrations carried in the previous hardbacks.

Twelve years later, in 1978, Eyre Methuen released the book again in hardback and paperback in Britain and called it a "second edition". Lacking from this 1978 "second edition" are notes about any changes or edits made from the "first edition". Comparison of the 1978 printing with the 1966 Penguin paperback (a version with the "misprints and errors" of the first printing expunged) shows that it is identical, evidence that the Eyre Methuen 1978 printing is not a second edition at all, rather that it is the ever-so-slightly corrected version from 1964, a usual practice for the follow-up paperback issue. It would be correct to say that any publication of this book from 1964 onwards is the corrected first edition, not a second edition. What the publisher means by "second edition" clearly is that the 1978 King John was not issued by the first publisher, Eyre & Spottiswoode, but by their successor Eyre Methuen. Comparing this same 1978 printing with the original 1961 printing shows again that they are substantially identical including the pagination - save for the addition to the later printing of Appendix C, a nine page account of 'The Accident to King John's Baggage Train'.

UC released King John in paperback 1978 in the United States. The University of California Press website states that this version is the first edition, contradicting the statement in the British version by Methuen of the same year! Although it is a paperback version, it has the same pagination as the simultaneously released Methuen British hardback, rather than the slightly condensed text (ie. more on a page, and fewer pages) in the 1966 Penguin paperback. The differences are fascinating. The same UC webpage also states, anachronistically, that this printing is part of the English Monarchs series, which it wasn't at the time it was issued by that publisher.

The book had another American hardback release by Barnes and Noble in 1996. This is not as odd as it sounds; Barnes and Noble had enjoyed a partnership in the past with Methuen and had published at least a few British/Methuen titles in the United States. The book was released yet again in the October 1997 Yale hardback and February 1998 Yale paperback reprints - and named for the first time as part of the series. These Yale printings had a new introduction by David Carpenter bringing the book up to date. Yale reprinted a paperback version in 2018 with a most welcome high quality image of John's effigy on the cover - the first attractive cover this book has had since the 1978 Eyre Methuen reissue. Such a popular book for an unpopular king.

What is astounding about Eyre and Spottiswoode's handling of this title is that despite its popularity, despite its very positive reception, and despite its reprint in 1964 - the year in which the same publisher launched the English Monarchs series - they didn't have the vision to include the book in their new history series. This is lamentable. They had in their pocket the best biography of King John ever written, and still a classic today, yet they chose to follow up William the Conqueror in 1967 with James I, an inadequate and non-academic book about an relatively obscure king who was with little doubt much less interesting for book buyers. King John remained available to Eyre and Spottiswoode for many years and the oversight was compounded when it was printed again in 1978 by Eyre Methuen but still not part of the series. It is to J.J. Scarisbrick's credit that he saw this as a missed opportunity and under Yale's imprint brought Warren's King John into the English Monarchs series in 1997. A further indication that Eyre and Spottiswoode was blundering about with their history line is that on the inside rear flap of the dust jacket of King John the publisher had the announcement: "Also being published by Eyre & Spottiswoode - The Hollow Crown a life of Richard II by Harold F. Hutchinson 30s net." Despite 30 shillings being a fair amount of cash to part with in 1961 the Hutchinson book would prove to be a very disappointing title by a lesser historian, and by some order of magnitude in comparison to W.L. Warren. Hutchinson was a writer of popular history based on previous publications, certainly without the research, original thought and revisionism Warren brings to King John.

In a long essay 'King John and the Historians' in The Journal of British Studies Volume 1, No. 1, November (1961), C. Warren Hollister describes the importance of Warren’s study of John, and explains that it is a major modernisation of the reputation and image of the king. This is not a rehabilitation, but a refashioning of the terms used to describe him and his reign which had been used since Victorian times when he was seen in absolute terms as en evil genius. Kate Norgate (1902) had the view that he was of "almost superhuman wickedness”. Bishop William Stubbs (1897) highlighted his “mean trickery by which he qualified his capricious despotism.” Hollister finds that Warren’s comments on John’s superb ability as an administrator very timely, and marks a change in the way that a reign is assessed through legal and administrative records rather than the traditional sources. “As one does this, King John begins to appear in a new light” he says, and he further balances Warren’s view by adding that "Warren succeeded admirably in his task of portraying John in the light of the best modern scholarship yet in such a way as to appeal to to the non-professional and to wean him from his Victorian preconceptions...Unquestionably this is the most entertaining scholarly biography of John in existence, and its readability is not achieved at the expense of historical accuracy, depth or detail.” The Yale edition has an introductory essay by Professor David Carpenter (author of the English Monarchs series book on John’s son Henry III) in which he discusses how Warren’s biography of John is regarded in the modern day and in the light of recent scholarship of the period.

The addition of this title to the series requires some thoughts about applying a series date. It’s the earliest published work of any, yet the date of addition to the English Monarchs series is October 1997.  With the perspective that we are tracing the history of the history books, 1961 is given as the date of King John, and it becomes the earliest published book in the series. This is distinct from the earliest book published in the series, with a series attribution in the book itself. The difference is subtle, but favouring one option over another will determine the order of this book, and that of the earliest published titles when the concept of the series was still forming. See also the comments on the James I biography. Why Eyre and Spottiswoode never reached back to include King John in the series after 1964 is baffling. The publisher chose to ignore King John but included the very inadequate James I in 1967 (see the James I page for a contemporary review which is highly critical of its low quality).

In summary, this is the oldest book in the series, but the fourteenth title added to the series. Although the Yale version is the newest to be (re)published, the University of California Press still make their 1978 copy available for North American customers either via their own webstore or other vendors, although at a much higher price than the Yale copy.

*The ISBN scheme commenced in 1967. Numbers assigned to pre-1967 books occurred when the book was reissued or reprinted from 1967 onwards. This happens when a pre-1967 book remains in print - and the publisher orders more copies from a printer.

Given the many publications of this title it is worth knowing that an ISBN can be repeated in a different printing if the format remains the same, even if the cover is different. Hence, the 1997 Yale paperback has the same ISBN as the 2018 Yale paperback. Each publisher is identified by a unique set of numbers within an ISBN and therefore the number will change when a book moves to a different publisher.

Promoted to the English Monarchs series in 1997 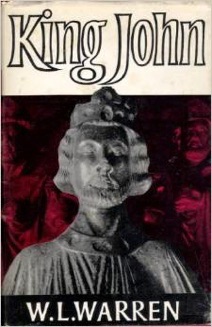 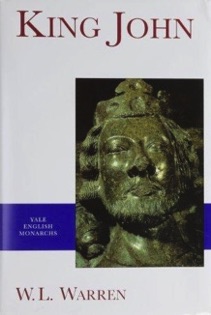 The hunting scene, first used in the 1966 paperback then in the 1978 Methuen/UC reprint, is credited in the books as from Cotton Library MS Claudius D. ii fo. 113 early 14th Century and held by the British Library.

The 1996 Barnes and Noble printing is clearly an undistinguished romantic Victorian image (ie. cheap) and cannot be identified.

The 1961 Norton copy was an obvious cheap cut and paste job for the American market.

The less said about the 1978 California paperback cover the better.

Ralph V. Turner - author of the Eleanor of Aquitaine biography just prior to this King John page - is also a biographer of Richard I and King John. His ‘King John: England's Evil King’ was first published in 1994 by Longman in hardback in their Medieval World series, and then in a revised paperback edition by The History Press in 2009. The hardback version uses the image of John hunting - the same as the 1978 Methuen printing of Warren's book. Turner's Introduction to the paperback surveys the literature in the fifteen years between the two printings, updating findings since the Warren biography. He states at the outset that his book is not an attempt to replace Warren’s biography and others, but to build upon them and take advantage of recent scholarship. To do that however, you must commence with Warren's masterful study.

Link to the book's webpage at University of California Press

Link to the book's page at Yale UK